The binlog sync contention was a problem from a long date in MySQL.. Well, it was less visible few years ago until MySQL performance was quite limited even without binlog enabled ;-)) However, with all latest performance improvement came with MySQL 5.5 and now with 5.6, it became unacceptable to see all these excellent goodies simply killed once a user enabling binlog..

Good news -- the latest MySQL 5.6 labs release is coming with freshly released Binlog Group Commit which is greatly solving this issue. You may find all details about in the Mat's article, while my intention in this post is just to extend little bit already presented benchmark results..

Well, the true performance problem with MySQL binlog is coming not really when it's enabled, but since the "sync_binlog" is set to 1 (means flush binlog to disk on every binlog write).. Usually such a setting is used when user want to avoid any possible data loss (while other value than 1 may be used if it's not a case, and what is curious that setting sync_binlog=100, for ex., may give you the same performance as sync_binlog=0 (means no flush), which may be not far from the initial "base line" performance level).. While setting sync_binlog=1 usually gave you x2-x4 times or more performance regression comparing to the "base line", and the main cost is coming from the number of sync/sec MySQL is doing (as your storage here may be quickly limited in I/O performance). So, the solution with "group commit" is coming naturally here (similar to InnoDB group commit in redo log writes) -- more writes you can group within a single "sync", better performance may be expected. However, as usual, all depends on implementation ;-))

So, what to say about the binlog group commit (BGC) in the latest MySQL 5.6?..

There were many tests executed before BGC became better and better, but I'd like to present you just few ones which attracted my own curiosity ;-)) While on "big" and powerful servers the performance gain was very impressive and pretty easy to obtain, I've also focused on a "small" 12cores server and very modest HDD + SSD config.


Test cases:
Test scenario:
NOTE: I'm testing only 32 concurrent users on this server because a higher load with sync_binlog=1 is hitting overall I/O limits on the storage level, and as well historically 32 users workload was the most "free of internal contentions" :-)

So far, on the following graphs you'll see 3 test cases (binlog OFF, ON, ON+sync_binlog=1) on 3 MySQL versions. Tests were executed sequentially, so you can see 3 tests executed on MySQL 5.6.4, then on 5.6-labs-April, then 5.6-labs-June. And there are also 3 graphs representing by order: 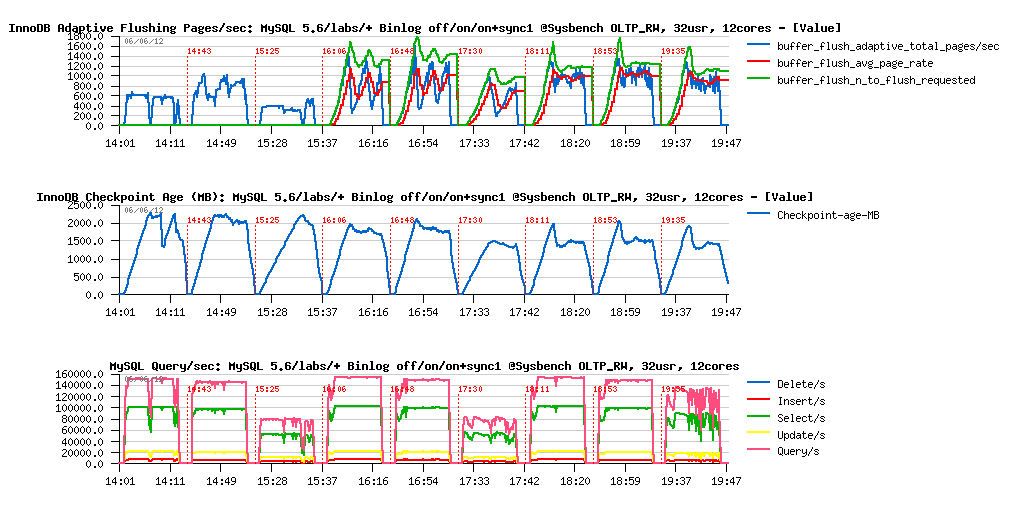 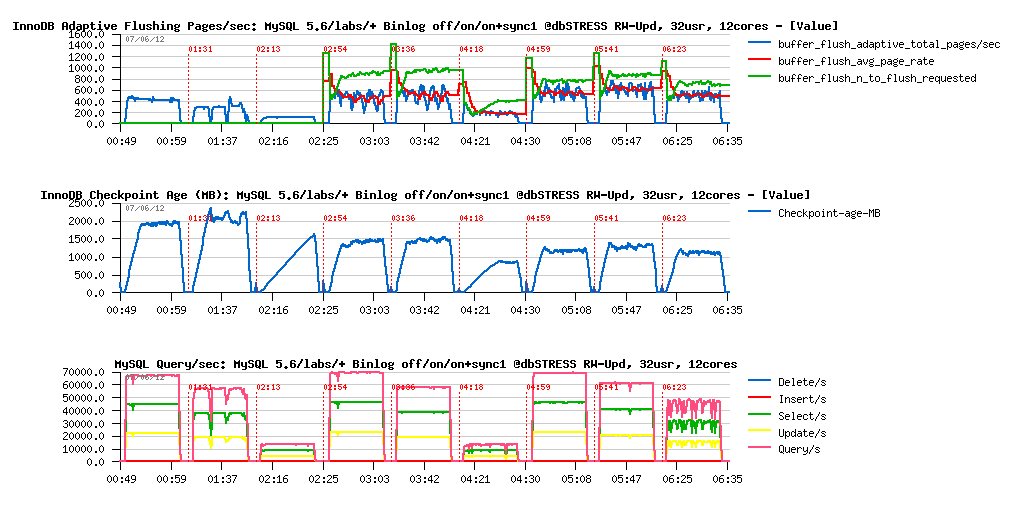 Observations :
However, what I don't really like in both test workloads is the QPS instability in 5.6-labs-June when sync_binlog=1 -- it may be related to some I/O level limits, or may be some kind of internal contention as well. So, have yet to investigate it later..

Then, of course the picture will be not complete for my curiosity, if I'll not test in the same conditions Percona Server 5.5 which is already integrating a similar solution developed by MariaDB team (MariaDB proposed its own BGC code before MySQL team, and if ideas are similar, implementations are not at all.. - but what about performance?..)

So, I've executed the same tests on Percona Server 5.5 keeping exactly the same config setting except changing adaptive flushing to "keep_average" (which is the best algorithm for this option in XtraDB), and here are the results -- similar graphs, but MySQL 5.6 first, then Percona 5.5 on the same test cases:

Observations :
NOTE : I'm intentionally not presenting here any results on more powerful server (32cores or more) as it'll face Percona Server 5.5 to to all performance contentions fixed in MySQL 5.6, which will already make Percona Server way slower even without binlog, so it's out of interest in this scope..


Posted by Dimitri at 17:55
Categories: MySQL