This post is following the story of MySQL 8.0 Performance & Scalability started with article about 2.1M QPS obtained on Read-Only workloads. The current story will cover now our progress in Read-Write workloads..

Historically our Read-Only scalability was a big pain, as Read-Only (RO) workloads were often slower than Read-Write (sounds very odd: "add Writes to your Reads to go faster", but this was our reality ;-)) -- and things were largely improved here since MySQL 5.7 where we broke 1M QPS barrier and reached 1.6M QPS for the first time. However, improving Writes or mixed Read+Writes (RW) workloads is a much more complex story..

What are the main scalability show-stoppers in MySQL 5.7 and current 8.0 release candidate for RW and IO-bound workloads? - the most "killing" are the following ones :

so, it was definitively a time to take our hands on this ;-)) 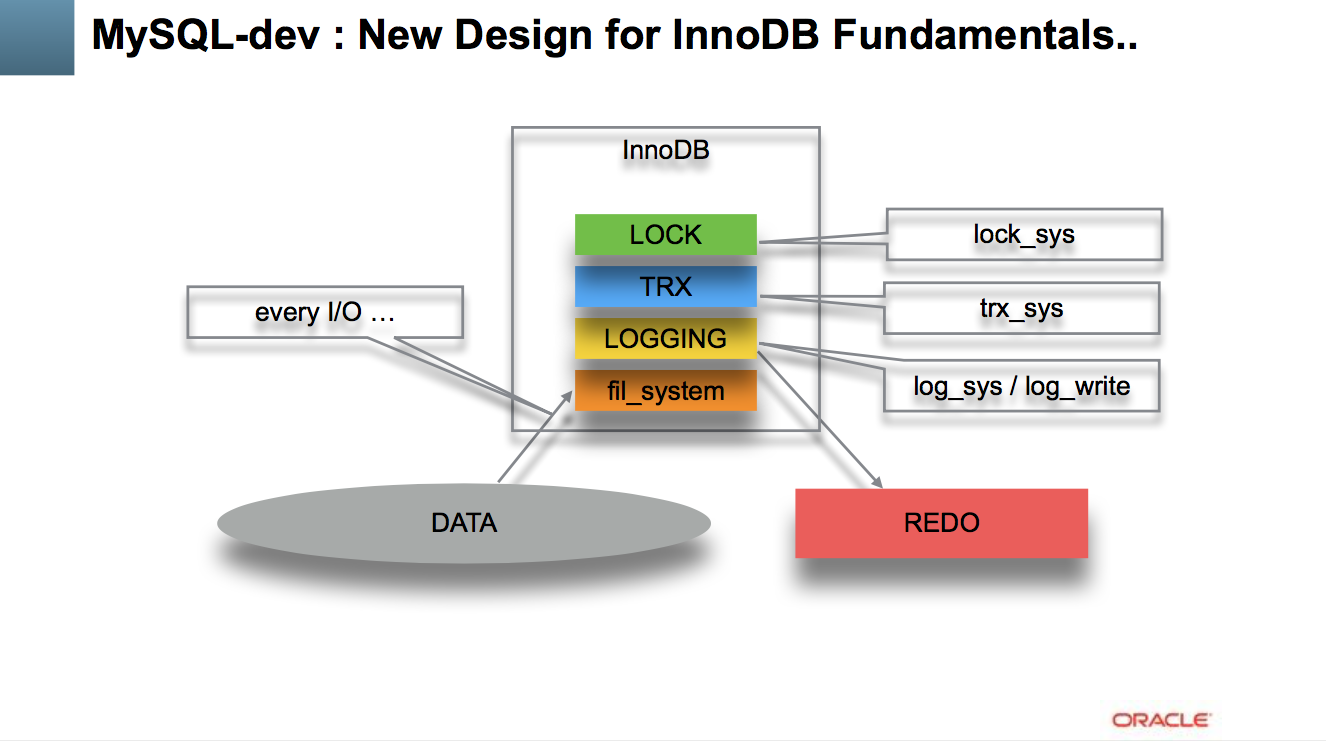 The whole story about is pretty amazing, but I have to be short, so :

While this article will be mostly about the changes we're doing for REDO.

And in fact the story around InnoDB REDO contains many various surprises :

During the past few years we came with several tentatives to improve InnoDB REDO log design, before to come with an understanding of what exactly do we need ;-)) -- our main target was to improve performance when trx_commit=1 is used (true security when we do flush REDO on every COMMIT), and from "do less fsync to improve performance" we came to conclusion "let's rather be driven by storage capacity".

So far, this is how the new REDO design is different comparing to before (very simplified) : 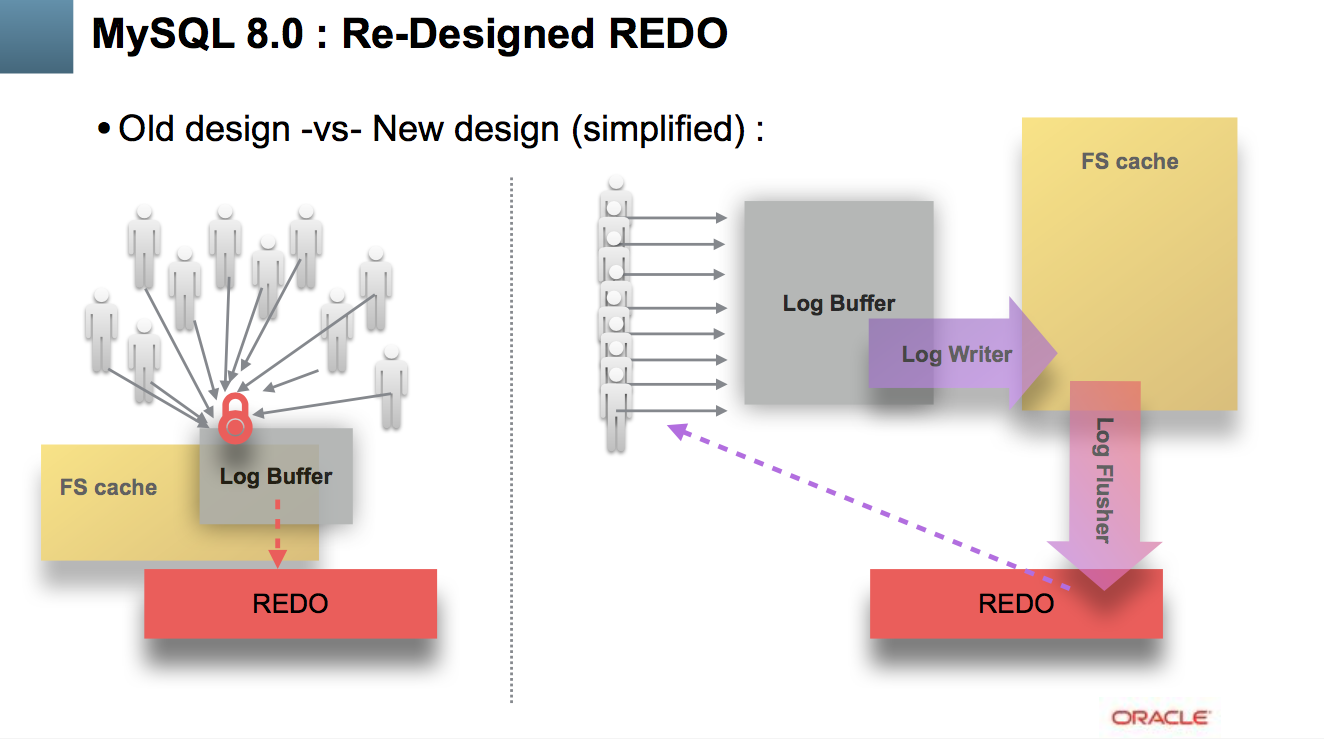 if before users were constantly fighting for permission to write to REDO, in new design they are not fighting anymore :

This new model is only the first step in further REDO improvements. Currently by resolving bottlenecks on REDO layer, we're unlocking user threads to do more work, which is resulting in yet more hot bottlenecks on TRX and LOCK layers. So, there is still a lot of work ahead, and indeed, we're only on the beginning..

However, with new model we discovered few surprises we did not expect on the beginning : 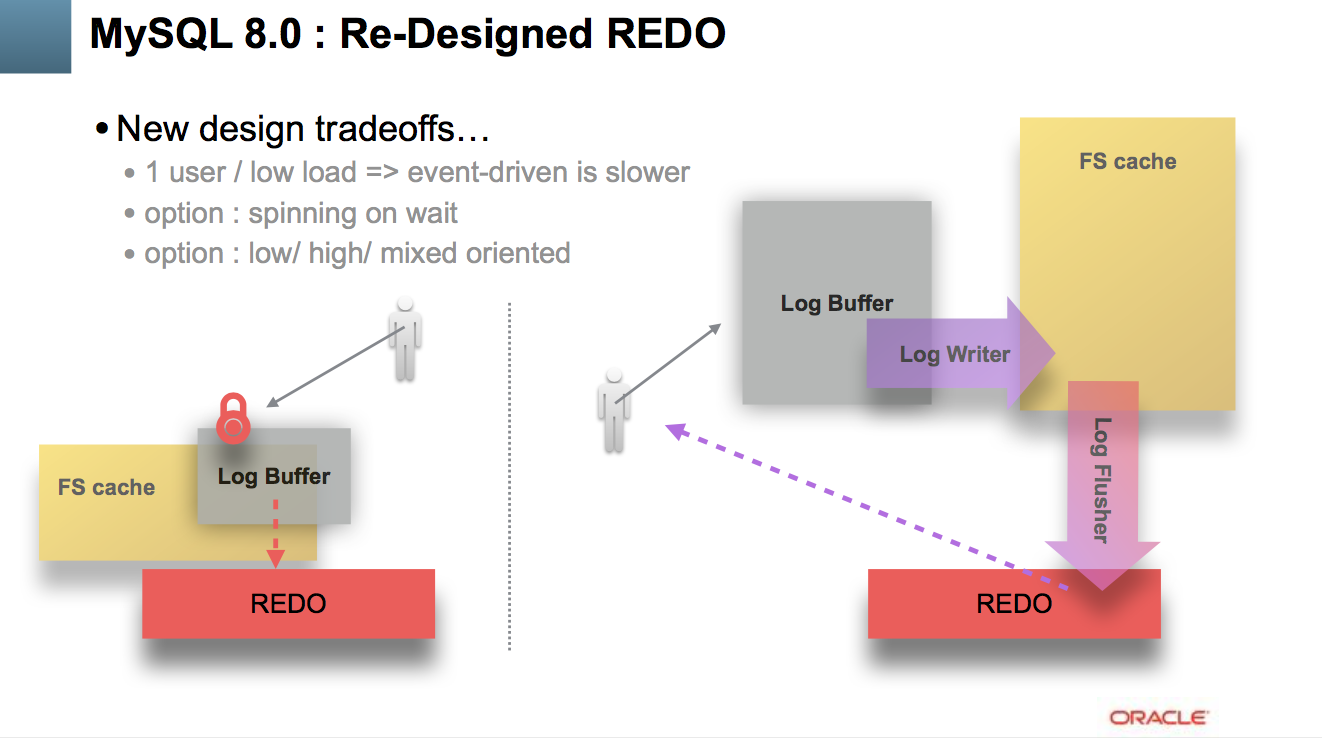 this all related to "low level loads" :

The following "dirty" snapshot from intermediate benchmark results on pure UPDATE workload comparing MySQL 5.6/ 5.7/ 8.0-rc/ 8.0-labs/ 8.0-labs-spinning could give you an idea what kind of headache we may have :

and our main expectation is by combining together all these bits + involving some kind of auto-tuning (or "auto-guided" tuning, etc.) come with something really stable and easy "tunable" for all kind of loads ;-))

While for the time being, here are few benchmark results we currently obtaining on Sysbench RW workloads :

The following config settings was used during the presented benchmark workloads :
NOTE:

Also, I've intentionally skipped here all the problems related to InnoDB Double Write Buffer (the only feature protecting you today from partially written pages (except if you're using COW FS (like ZFS or similar)) -- this feature as it is became a huge bottleneck by itself.. -- our fix was ready yet for MySQL 5.7, but missed the GA timeframe, so was delayed for 8.0, where it met a list of several pre-requirement before allowed to be pushed, but finally it's only a question of time now to see the fix applied and delivered as part MySQL 8.0 features..

In case you want to replay the same tests, you may follow the same instructions as in the previous post to setup the scripts and load the test data, then just execute :

OLTP_RW :
UPDATE-NoIDX :
So far, we're expecting to see a significant progress on RW performance with MySQL 8.0 ! However, regardless positive overall benchmark results comparing to previous MySQL version, we're still far from scaling on Writes.. -- work in progress, stay tuned, yet more to come.. ;-))

and THANK YOU for using MySQL !

Posted by Dimitri at 16:19
Categories: MySQL