Generally TPC-C benchmark workload is considered as one of the #1 references for Database OLTP Performance. On the same time, for MySQL users it's often not something which is seen as "the most compelling" for performance evaluations.. -- well, when you're still fighting to scale with your own very simple queries, any good result on something more complex may only look as "fake" ;-)) So, since a long time Sysbench workloads remained (and will remain) as the main #1 "entry ticket" for MySQL evaluation -- the most simple to install, to use, and to point on some sensible issues (if any). Specially that since new Sysbench version 1.0 a lot of improvements were made in Sysbench code itself, it really scales now, has the lowest ever overhead, and also allowing you to add your own test scenario via extended LUA scripts (and again, with lowest ever overhead) -- so, anyone can easily add whatever kind of different test scenarios and share with others ! (while I'd say "the most compelling test workload" for any given user should be the workload which is the most closely reproducing his production load -- and you can probably do it now with new Sysbench, just try it !).

However, from MySQL Dev side, every given benchmark workload is mostly seen asa yet one (or several ones) problem(s) to resolve. Some of problems are common for many workloads, some are completely different ones, but generally it's never about "something cool" -- and we're just progressing in this long road by fixing one problem after another (to hit yet another one again). So, TPC-C workload for MySQL is just yet another problem to resolve ;-))

Historically the most popular TPC-C implementations for MySQL were :
Both versions were implemented completely differently, but at least both were very "compelling" to MySQL users, as they can run TPC-C workload via SQL queries (and not via stored procedures, which are more popular for other DB vendors).. So, it was up to anyone preferences which of 2 test cases to use (while personally I'd say it was always more simple to install and use TPCC-mysql). However, since new Sysbench is here and Percona now ported their TPCC-mysql to Sysbench -- for me it's no doubt everyone should move to Sysbench-TPCC if interested on TPC-C testing ! (and kudos Percona to make this happen !! ;-))

So, what is good with new Sysbench-TPCC :
From the past testings I've already observed that the most "representative" data set size for TPCC workload is around 1000W (1K "warehouses") -- it's not too small, nor too big to take a long time to generate the data + allocate too much disk space (generally it's using around 100GB in InnoDB once loaded).. -- probably over a time I will also test a x10 times bigger volume (or more), but for the moment the 1000W volume is already big enough to investigate MySQL scalability limits on this workload..

So far, my test scenario will be the following :
Sysbench-TPCC 1000W
here is the result with MySQL 8.0 :

Comments :
We're scaling on this workload only up to 32 concurrent users, so having more CPU cores could not bring any help here.. And what is the bottleneck ? -- we're hardly hitting index RW-lock contention here :

with such a hot contention the difference between MySQL 8.0 and older versions could not be big ;-))

Comments :
From the other side, I don't recall to hit the same index lock contention while testing 1000W dataset with DBT-2, so I was very curious to compare it with Sysbench-TPCC 1000W on 2S and with BP=128GB :

Comments :
So far, let's get a look how the things are changing when 10x100W dataset is used :

Comments :
This is because by using 10 datasets in parallel we multiplied the number of all tables by 10, which is dividing the initially observed "index lock" contention by 10 too (!) for the same number of concurrent users -- and moving the internal bottleneck to another place, and now it's hitting lock management part (lock_sys mutex contention) : 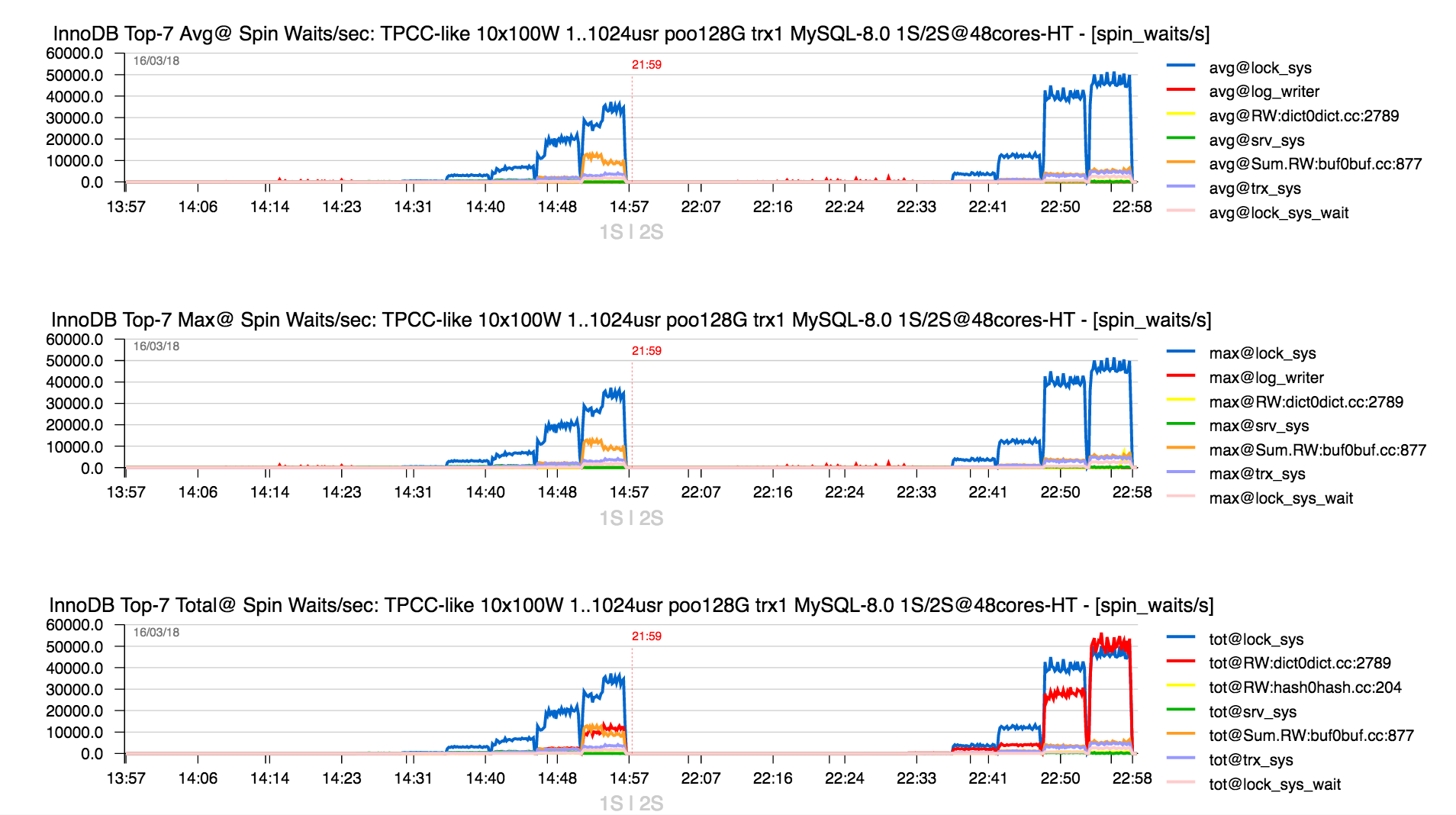 And I was ready to finish my post here, while Percona published their benchmark results comparing InnoDB -vs- MyRocks on Sysbench-TPCC 10x100W workload ! -- I was happy to see that MyRocks is progressing and doing well, but my main attention was attracted by InnoDB results.. -- as you can see from all the results I've presented above, there is not too much difference when we're going from 128GB BP config to 32GB BP config.. While from Percona results we're seeing exactly opposite.. -- not far from x3 times lower TPS between 128GB and 32GB BP configs ! -- how ever such is possible then ?..

Unfortunately the article is not trying to explain what is going behind, but just showing you the numbers.. -- so, let's try to investigate this a little bit ;-))

First of all, in Percona tests was used 2S 28cores-HT server, so I'll limit my HW setup to 1S and use 24cores-HT only (for sure, it's not the same CPU chips, but at least the number of really concurrent tasks executed in parallel will be similar)..

Then, comparing the configuration settings, the most notable differences are :
From the follow-up Percona results you can see that this TPS drop between 128GB and 32GB BP is NOT related to binlog, so I have at least one option less to investigate ;-))

So, first of all I wanted to re-check the "base line" results with BP=128GB.

The following graph is representing MySQL 8.0 under Sysbench-TPCC 10x100W workload with different config settings -- I'll try to be short and present all the test cases together rather one by one, so you can see all the 4 tests here :

Comments :
So far :
So, let's add the test #6 which is the same as test #4 (doublewrite=ON, AHI=OFF, checksums=ON) but with innodb_thread_concurrency=32 :

Comments :
Ok, we're able to "hide" the doublewrite contention, fine ! -- but could we reduce the overall Writes impact here ? (with reduced Writes we'll much less stress doublewrite buffer, means its lock contention will be lower, and probably overall TPS will be higher then ?.. -- And YES, in this workload it's possible ! ;-))

How ?.. -- remind that this TPCC, e.g. pure OLTP workload, and, as I've mentioned before -- the data access is "grouped" (so, some data are re-used from BP cache before to Read another ones). And these workload conditions are perfectly matching the story I've explained in 1M IO-bound QPS article with MySQL 8.0 -- let's try the same test #6, but with InnoDB configured with page size = 4KB, which will be the test #7 on the next graph :

Comments :
INSTEAD OF SUMMARY
Thank you for using MySQL ! -- stay tuned ;-))

Posted by Dimitri at 2:51
Categories: MySQL