This is the third part of the MySQL 5.6 Performance Notes started from here.

Now let's get more in depth and analyze performance results on more "focused" workload scenarios.. - for the moment MySQL/InnoDB is scaling up on 32 cores and most optimally working with up to 32 concurrent sessions where no any severe contention is not yet happening. So the 32 users workload on 32 cores will enter in the focus in the following part, but this time it's a full troubleshooting rather benchmarking.. ;-))

NOTE: there was a question what is the difference between "Read+UPDATE" vs "Read+Write" test? - "Read+Write" is doing 3 DML queries within a one operation (in reality there are 3 transactions within 1 Write) - DELETE, INSERT and UPDATE. While "Read+UPDATE" is executing only UPDATE query within Write operation, that's why to keep in mind this difference I'm calling it "Read+UPDATE".. - and one moment is very important within an UPDATE query used in this test: it's involving "in place" modification of data and without touching any index, so it fires at once any potential issues (if any) in purge, as there is only UNDO images to purge, and it "plays" with different InnoDB internal contentions as well ;-)) 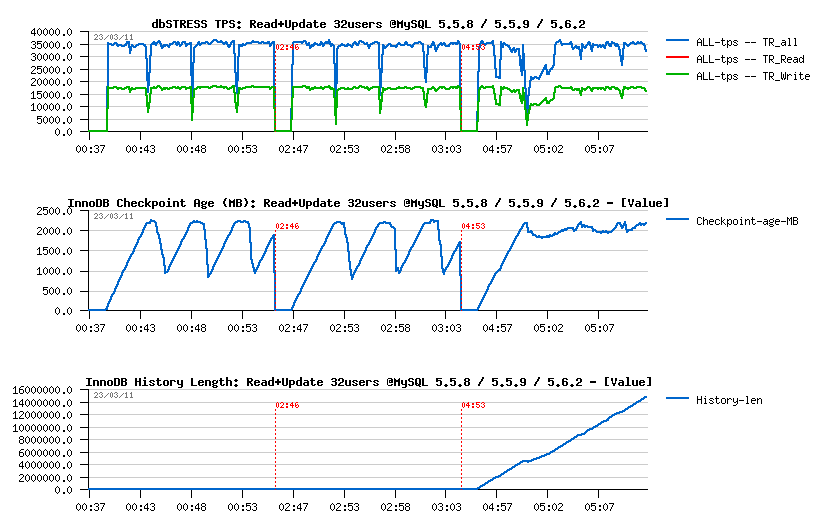 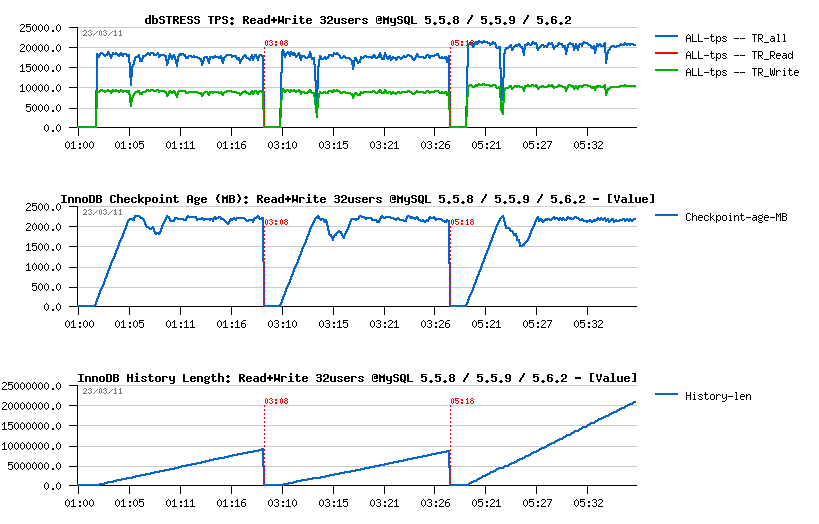 Note about Adaptive Flushing in MySQL 5.5 - since 5.5.6 release the InnoDB adaptive flushing became more "relaxed" comparing to 5.5.4 version, and seems this behavior remain the same up to the MySQL 5.5.9 (and MySQL 5.6 need yet to be investigated).. The "relaxed" nature of the flushing in 5.5.6 I've reported before in my MySQL 5.5 Notes and the following graph explaining very well the issue:

Personally, I'd prefer a more "aggressive" flushing rather "relaxed", but nobody is perfect ;-))

But well, since adaptive flushing is not flushing enough to avoid "furious flushing", we may still increase the flushing by lowering the percentage of dirty pages setting (and again, it'll be more optimal to simply increase the size of the redo log files, but this feature will be available only in the next 5.6 release..) 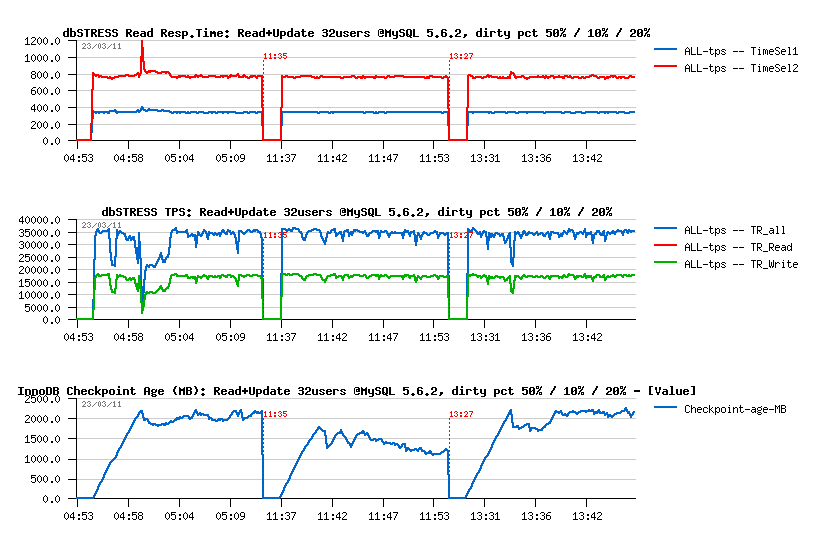 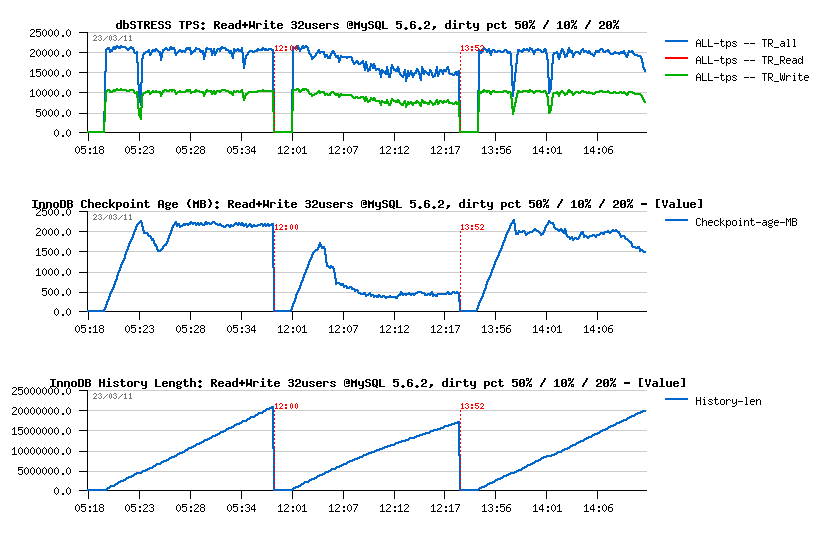 Well, seems like by lowering a dirty pages percentage we may bring more stability in workload, but of course it'll be better to have adaptive flushing working correctly to avoid such a tweaking :-)) Another possible solutions:

Analyzing Purge Activity
Ok, so far and what about this growing History Length?.. - it's looking like we have an issue with a purge processing..
So, there is a problem for sure.. And the only solution may help here is to use a "max purge lag" setting. But to make it working a little hacking is needed in the code - just to comment out the check for a presence of consistent read when the max purge lag condition is verified, otherwise it'll be never involved.. (BUG #60776 (http://bugs.mysql.com/bug.php?id=60776)). The idea of this feature is to delay DML statements for some milliseconds if the purging is not fast enough and cannot follow the workload activity (and bigger the lag is, a bigger delay will be used (calculated dynamically)).. 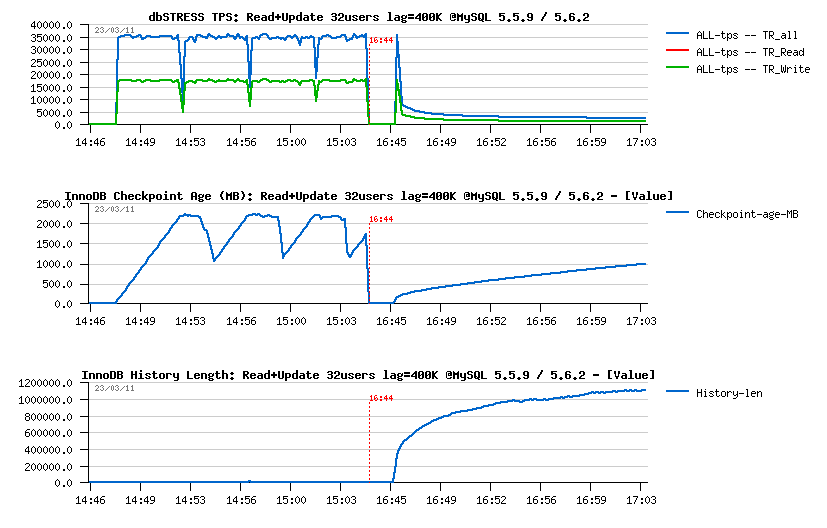 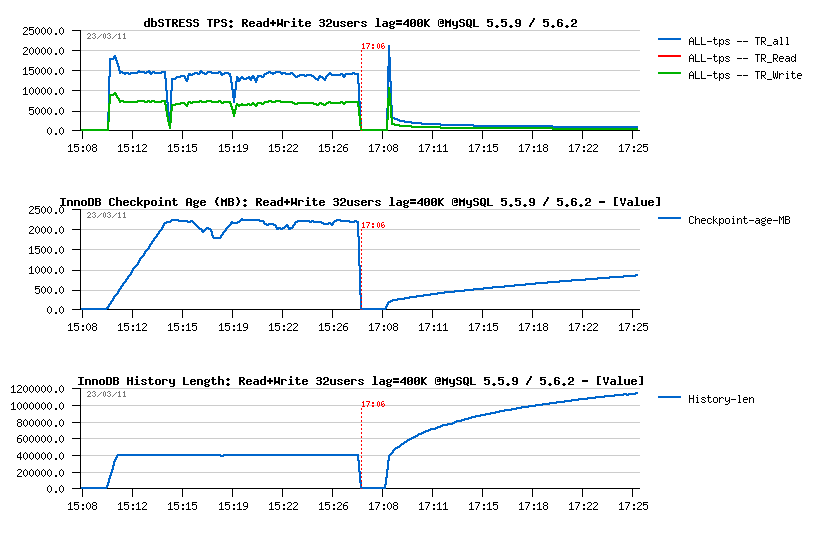 Seems more investigation is needed on the purge implementation within MySQL 5.6. There is a real problem here..


Also, in parallel, I've discovered that there may be some background effects due a data blocks moving when I'm testing 5.6 after 5.5 tests (as well it may be just a simple "feeling" without any objective reason :-)) - but anyway, all the following "debug" tests were executed on the freshly restored database from a zero state backup.. 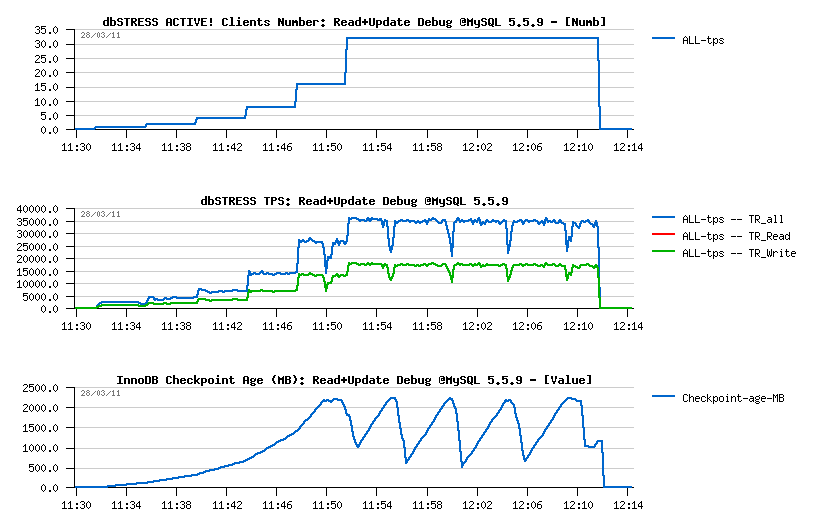 Observations :
Then, from the following graphs: 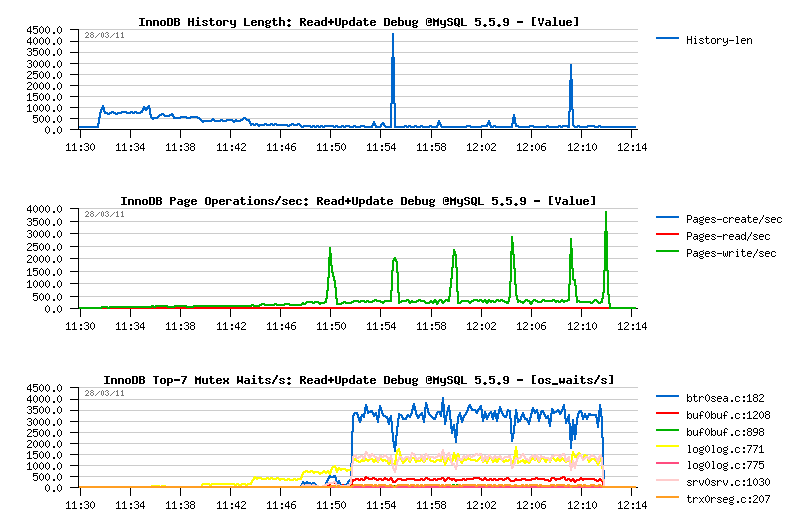 To make it shorter, I'm presenting 2 results on the same graph
So far: 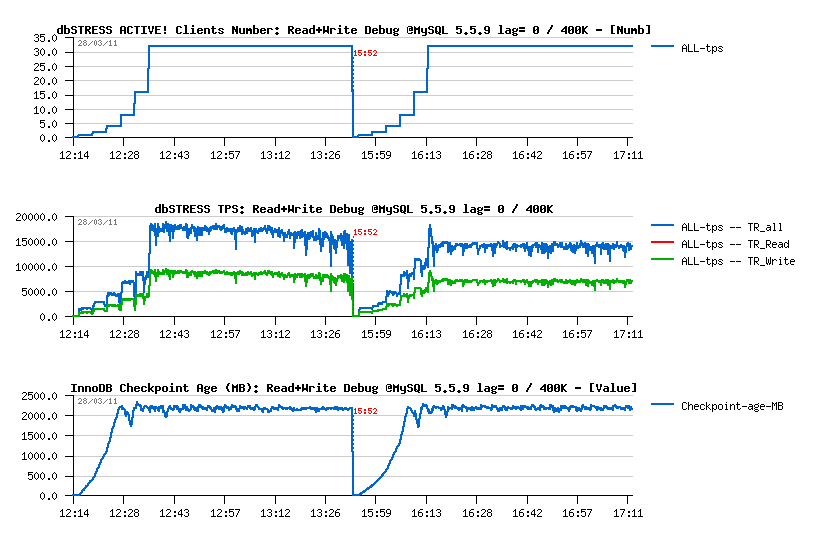 Observations :
Then History Length graph is explaining all: 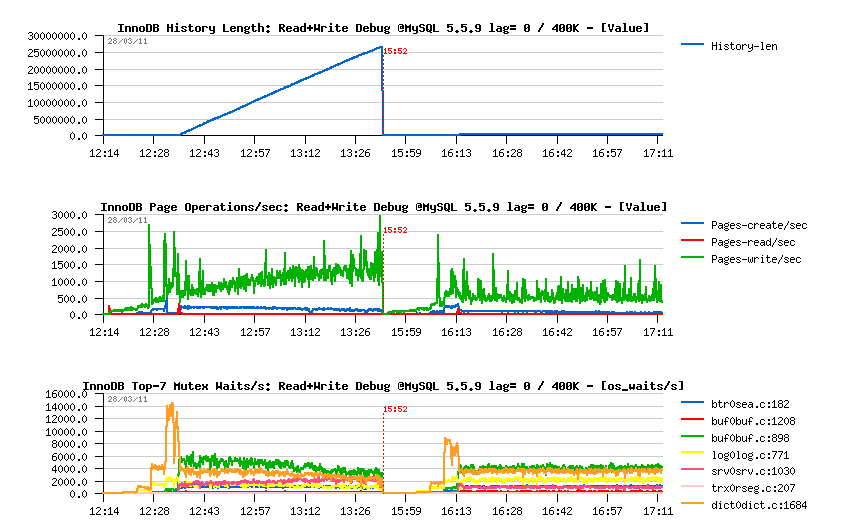 As you see:
Well, globally using max purge lag=400K is quite benefit is you're not running for an "absolute max" possible performance, but seeking for a stable one like me ;-)) and after all comparing 16.000 TPS and 14.000 TPS it's just little bit more than 10% performance regression, however the gain in stability is simply huge! ;-))

So far, if with Adaptive Flushing it's clear that in some cases it's simply not flushing enough and it should be just improved... - then regarding Purge there is something really going wrong and I have to get a look on it more closely.. It gives an "impression" to be "absent", but what kind of Purge activity we have on a single session?.. - still "absent"?.. on 2 sessions?.. 4?.. 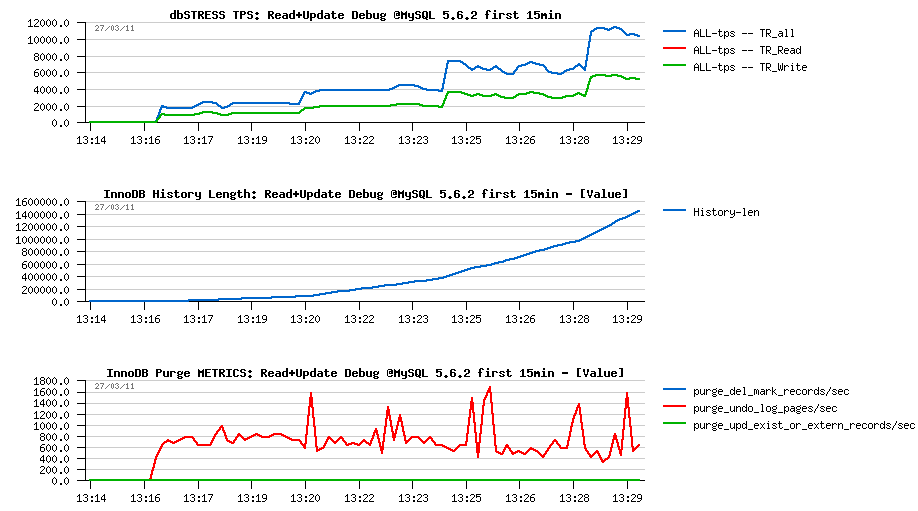 Don't think that this problem is related to dbSTRESS workload as on this test there are a simple series of SELECTs and UPDATEs, nothing special.. Will be interesting to see if the picture is the same on "sysbench" too..


Few comments about InnoDB METRICS tableThe feature is really great as it's very easy to configure and request. I've finally enabled all counters as I did not observe any performance impact during my tests.

So added to my my.conf:

Then to see a flushing activity for ex.:


Note: there is a negative value in "buffer_pool_pages_in_flush", should be a bug?

Posted by Dimitri at 23:06
Categories: MySQL