This article is providing the details to the 500K QPS with MySQL 5.7 benchmark results published earlier and explained during my talk at MySQL Connect..

Looking back in the history of MySQL / InnoDB improvement, you may easily realize that there was no any so big speed-up(s) between releases in read-only (RO) performance as they came with MySQL 5.6. And it's easy to understand as well that without having a good level of scalability on read-only, it's hard to expect to reach a good level on read+write (specially when reads are dominating ;-))

However, we were so happy with RO performance in MySQL 5.6, that with 5.7 we turned our main focus on the read+write (RW), because on big data volumes things are not yet going as we wish.. But the RW dependency on RO jumped up once more again, and then InnoDB team came with few more improvements to push the max QPS level in 5.7 yet more far.

But let's take the things by order..

In fact in MySQL 5.6 on RO workload dominating internal contentions are


Any fast single-table-bound workload will be mainly blocked by MDL contentions. While multi-table will be limited by InnoDB internals (different tables will be protected by different MDL locks, so contention bottleneck on MDL will be lower in this case). But again, all depends on a workload too -- a more generic and wider RO workload should scale in MySQL 5.6 pretty well (like Sysbench OLTP_RO), while workload with short and fast queries (like Sysbench Point-Selects (fetch a record by PK)) is hitting all these contentions much more harder and will scale only up to 16cores-HT, having a worse result on 32cores.. But any such a workload similar to Point-Select test will show you the max possible performance rate on which all MySQL internals are able to work together (starting by SQL parser and finishing by row fetch round-trip).. This will be as well the max possible SQL query/sec (QPS) rate you may ever achieve on a given MySQL version and a given HW configuration.

For MySQL 5.6 our best obtained result was around 250K QPS, which on that time was the best ever seen on MySQL / InnoDB with SQL queries ;-)

However, it was only possible to achieve if READ-ONLY TRANSACTIONS were used (a new feature in MySQL 5.6), and again, if AUTOCOMMIT=1 was used, otherwise CPU cycles are simply wasted to process START TRANSACTION / COMMIT statements, and you're loosing in overall performance for sure..

So, the very first improvement introduced within MySQL 5.7 was an auto-discovery of RO transactions (in fact any InnoDB transaction is considered as read-only until any DML is not involved within it).. - this simplified a lot the RO transactions feature itself, and life for users and developers too - no need to take care anymore if RO transaction statement was used or not. But again, you cannot reach the max possible potential QPS on MySQL with this feature as CPU time is still wasted by processing transactions begin / end statements..

On the same time Percona came with a different solution to resolve "transaction list" management (TRX-list) and as the result lower the trx_sys mutex contention within InnoDB. Percona's solution kept better a high load on Point-Selects with transactions workload, but MySQL 5.7 was yet more better here (but I was not able to publish the results of 5.7 as its code was not yet public).. So, at least I'm able to do it now : 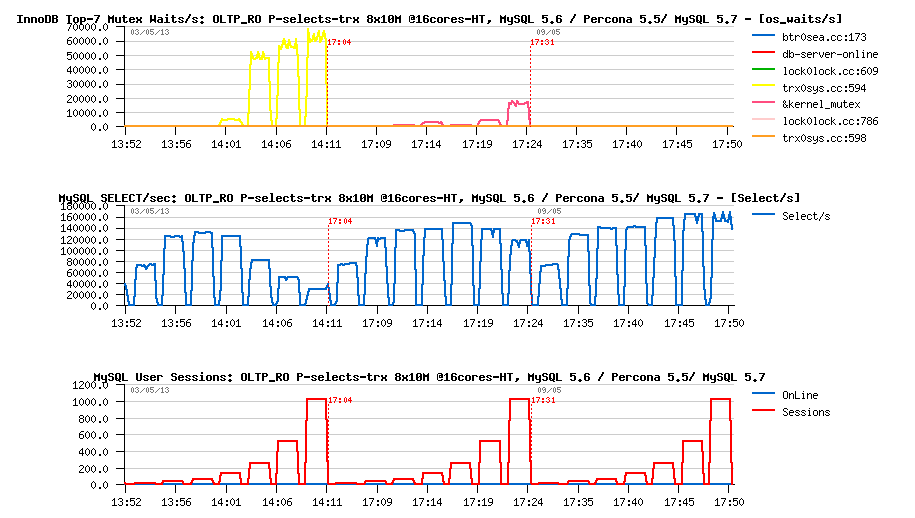 However, it's clear that if one is willing to get the MAX of potential RO QPS rate with MySQL - transactions should be avoided.. 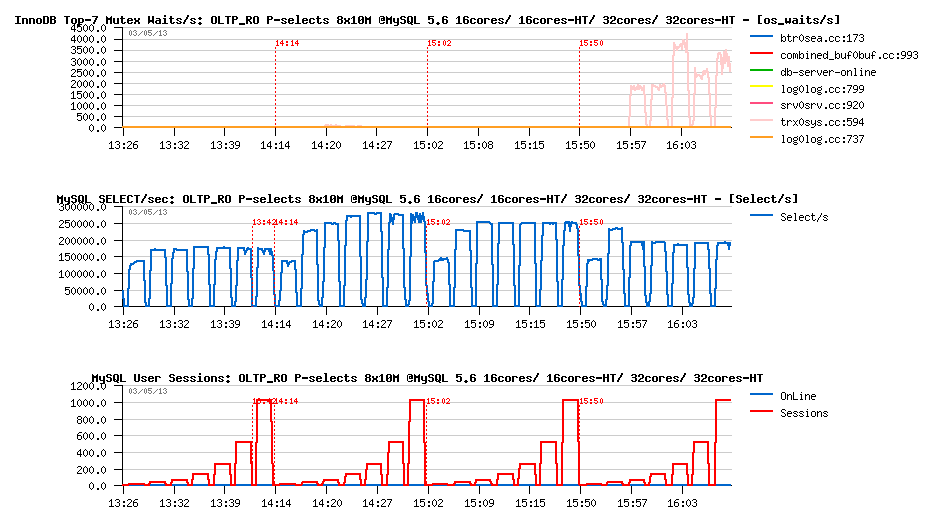 Observations :
While the same test on MySQL 5.7 was looking pretty differently, as for that time contention on the lock_sys mutex was already lowered in 5.7, and trx_sys mutex related code also got its first changes: 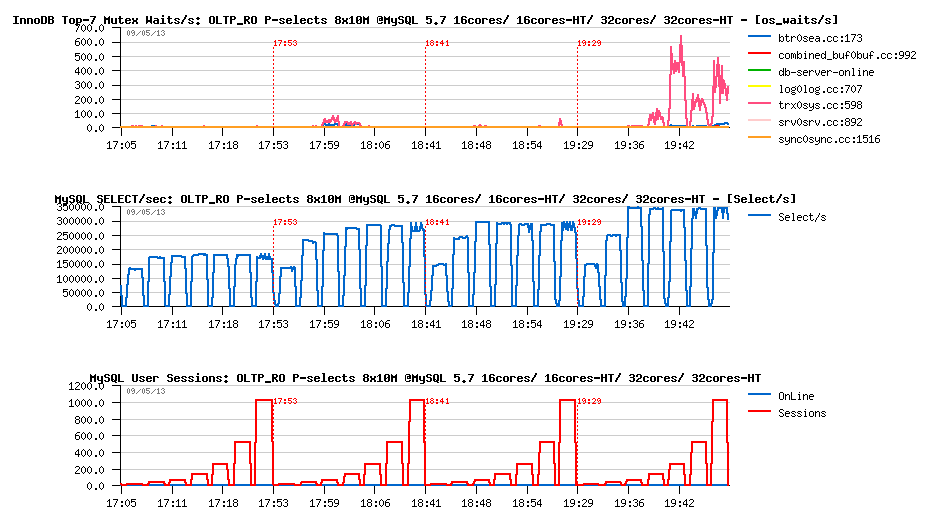 Observations :
Comparing to all we saw until now, that was really very good!! ;-)

From the other hand, it was clear as well there is still a room for improvement. Contention on trx_sys was still remained. We did not use a full CPU power to do a useful work (still a lot of CPU cycles were spending on lock spinning).. But the result was already better than ever, and way better than 5.6, so there was no valid reason to continue digging to improve performance here, while our main focus was on RW workloads where we have even more huge room for improvement..

By the end of May, during our Perf-Meeting, Sunny added few changes more around trx_sys mutex contention, and our Max QPS moved to 375K QPS(!) since then - should be more than enough as improvement for 5.7, right? ;-)

On the same time we continued exchange with Percona team who proposed to manage TRX-list in a different way.. - the solution looked interesting, but on 5.5 code base was unable to show a higher QPS, and on 5.6 code base (once Percona Server 5.6 was available) the Max QPS was not bigger than in MySQL 5.6. However, the discussion involved a very interesting point: what will be the impact on RO performance if there will be some RW workloads running in parallel?.. And even if MySQL 5.7 code was still running better within the same test conditions, the impact was very visible (you may find my analyzes about here, while, again, I was not able to present 5.7 results during this time as the code was not public yet - may provide it in one of the next articles now)..

And as any pure RW workload was impacted here as well, there was enough of motivations to finally remaster the whole TRX-list related code in a way that Sunny wanted to see it from a long time.. And this experience was simply amazing! ;-)) Day after day we enjoyed to see our QPS graphs going higher and higher.. - till reached 440K QPS(!) on the same 32cores-HT server.

However, there was a small mystery around.. - we intentionally with Sunny analyzed all bottlenecks and impact of code changes via different tools, and on some of the tests for my big surprise Sunny observed higher QPS levels than me.. This "mystery" was related to the following factors:
Let's compare "before" and "after" :

Let's get a look now on Max QPS obtained on the same Point-Select 8-tables workload on other engines as well. I've used the latest ones available on beginning of Sep.2013 :
Each engine is tested within the following configuration variations:
Then the best results from any given combination for every engine are compared -vs- others. And I'm obtaining the graph which I've already presented in the previous article:

Few comments :
And what about scalability?

The answer is simple: MySQL 5.7 is the only one scaling here.

Then, if IP port is used and a more "heavy" Sysbench-0.4.13, the results are the following:

QPS is just slightly lower, but the tendency is exactly the same..

And scalability is pretty similar:

More other results will come, so stay tuned ;-)

NOTE : for a single-table-bound workloads the story is not yet good:
We have yet many challenges ahead of us ;-)

For reference, my HW config for presented tests was the following:
my.conf:

In case you need it, Linux Sysbench binaries available from here:
The Sysbench command used to run Point-Selects test via UNIX socket (starting 8 processes in parallel):