I've got many questions during User Conference about InnoDB Purge Thread feature. And I've promised finally to write a short blog post explaining this feature in details and specially why do you need it :-) Don't know if it'll be short, but hope you'll have less questions by the end of this article.. :-)

So far, during the User Conference we presented the following graph to demonstrate the InnoDB Purge Thread in action:

This graph represents 40 min of non-stop activity under dbSTRESS Read+Write workload with 32 user sessions. On the left part of graph you may see the TPS level observed while a purge thread is turned off. And on the right part when it's turned on. From the graph you may see that once purge thread is activated it makes transactional throughput free of all periodic freezes of activity (and seen here as TPS level drops)... And curiously many people manly retain just "ok, it makes the picture more beautiful, but it reduces overall performance, so will keep in mind, but not sure I need it" or "as it reduce performance, I'll avoid to use it, thanks"... The problem that it's not so simple :-) I've wrote many times last year about the purge problem (and if you want all details, the end of the story yo may find in this report ). But in few words - lets get a look on the following chart, it represents the processing logic of the Master thread in InnoDB (also called background/maintenance thread): 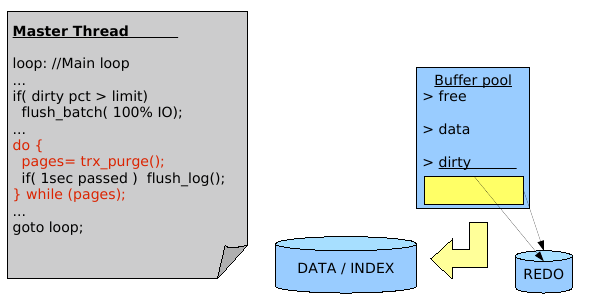 Let's get a look on the following graphs:

As you may see: 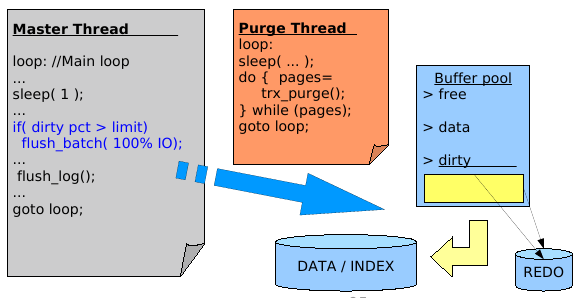 So far, after all that said, don't know about you, but all my future benchmarks will be executed only having purge thread settings on :-) And, honestly, if you think well, having purge thread enabled should be a default InnoDB configuration, and probably just the only one.. - but it's my personal opinion.

The story with a Purge Thread started for me in Dec.2008 when during my dbSTRESS tests I've observed that any of my dirty page percentage settings was simply ignored by InnoDB, and periodic performance drops happened during every test. Folks from Percona claimed that it's due missing adaptive checkpoint feature, and in Jan.2009 I've made another series of test and demonstrated that the same issue is present in XtraDB too. Then after various testing I went finally into the InnoDB source code and started to trace it in depth to discover that Master Thread is not leaving purge loop.. On that time the same problem was reproduced not only on dbSTRESS workloads, but on DBT2 too. And finally in Aug.2009 with a common effort from Sun/MySQL teams the Purge Thread feature was born, and I've published the patch for MySQL 5.4 that anyone may try and test before it'll come with a next 5.4 release. It was not just an idea, it was a ready for production solution :-) The only problem that from 5.4 branch there was a decision to move to the InnoDB plugin branch on that time, and after all organization and other problems this feature was officially integrated only now, in Apr.2010. But there was nothing "peeked at XtraDB" here.. - it was the result of a long and common work of Sun/MySQL teams. However Percona curiously very quickly forgot from where the solution is coming from.. And I never even think to write it until I did not see this "peeked at XtraDB" list ;-)

There are still several things to improve:

Posted by Dimitri at 13:31
Categories: MySQL