Until now, when you observed a performance degradation with a growing number of concurrent user sessions in InnoDB the most simple way to avoid such a degradation was to set innodb_thread_concurrency to something different from zero (zero is a default now in 5.5) - and since 5.5.4 the most optimal value was around of 32 (before it was 16 )... But all latest performance improvements in 5.5 are so good that it become less and less true now, and during my last tests I've even observed a worse performance when a different from zero "innodb_thread_concurrency" setting was used.. - seems to me now the overhead of the thread concurrency management code in some cases become more important than an overhead of still existing lock contentions ;-)

First of all - why "innodb_thread_concurrency" is even existing as parameter?.. - MySQL is written as a multi-threaded application and each connected user session is a thread within MySQL (and OS as well), which is quite more optimal comparing to other vendors where a session is an independent process (like in PostgreSQL or Oracle) just because a thread is way more lightweight for OS comparing to a process, and context switching between threads is usually going much faster and cost much less comparing to processes based model.. - But! having a more optimal model doesn't yet mean to have a scalable database engine! - and as I say usually, everything depends on implementation ;-) And in multi-threaded application all threads are running within the same process and have direct access to everything inside of this process, they may change any data at any time, so you have to apply and follow some synchronization rules within your code to protect your data by shared or exclusive locks to be sure there will be not possible to have more than one changes of any critical data on the same time - and it has a cost! :-) But again, all depends on how these locks are implemented and used within a code.. And not so far, just 2 years ago(!) MySQL/InnoDB did not scale more then up to 2-4 CPU cores! :-) - Today the limit is already pushed up to 32 cores, and work is in progress ;-)

But what about InnoDB thread concurrency?..

InnoDB is also implemented as a multi-threaded application and also has a lot of locks ;-) And once locking become too hot, the system start to spend more CPU time to manage InnoDB thread locks rather to do any useful work.. And these locks are not "user application locks" (for ex. when many users are trying to modify the same raw) - no, these locks are coming from InnoDB implementation design and independent to your "user application" - and once you're blocked by InnoDB internal locks, you're done.. ;-) (except if you feel yourself comfortable to modify the MySQL/InnoDB code :-))

Ok, but even if this lock contention is inevitable, may it be at least reduced or limited?..

Yes, it's possible - all you need is just to find after which amount of threads running concurrently you're observing a performance degradation, and then simply limit the number of possible active threads to this amount! And there are at least two possible solutions:

Both solutions are not free from limitations, but in the past the first one was the most optimal.. Then things are changed with a time, MySQL/InnoDB became more optimal and if you use Linux - it's also improving all the time :-)

So if in the past, on most of my tests setting "innodb_thread_concurrency=16" improved performance stability since 32 concurrent user sessions  and looked like The MUST... Now, I have a 32 cores (bi-thread) Intel box running Linux, and let's see if things are looking differently TODAY ;-)

I want to compare the same workload within the following configurations :

NOTE : task set on Linux is not giving any exclusivity on the task-set CPU cores like processor-set on Solaris, so my load generator may use these cores too and it's not a problem here, because my goal is to reduce the MySQL/InnoDB contention by reducing the number of active tasks executed in parallel.. - Also, usually when we're presenting results on 2/ 4/ 8/ 16/ cores we're also limiting the injector to something equal.. - I'm not limiting injector here, I want to have it running on its full power, and just limit the contention within MySQL, so a test result on 8 cores task set doesn't mean a MySQL result on 8 cores! - just that MySQL contention is limited to 8 cores and other cores may still do other useful stuff (networking, I/O, etc. ;-))

Also - my CPU cores are having 2 hardware threads, so it's hard to say that one core is equal to one simple core, in case of MySQL bi-thread core may work as well as two cores!.. - and helping to reduce the lock contention as only one hardware thread from two may be executed by its core on the same time..

I'll start with a Read-Only workload first (and as the Read seems to drive a response time, Read+Write is hardly depending on the Read performance).. As the lock contention may greatly be dependent on the SQL query nature, I'll test at least 3 queries having a different contention pattern:

To save place here, I'm putting the results from all 6 tested configurations on the same graph. Each configuration was tested one after each other, so you may observe 6 workloads over a time scale per graph. The first graph representing the number of active sessions (users). The second one - reached TPS level. And the third one - Top-10 Mutex Waits reported by InnoDB.

NOTE : the code managing the InnoDB thread concurrency is also using a mutex, but the waits on this mutex are not reported by InnoDB (BUG ??), so I may only suppose that this mutex become the hottest when the "innodb_thread_concurrency" set to a different from zero value (and as you understand, it cannot be seen either by Performance Schema if InnoDB is not reporting it..)

Let's get a look on the results now..

Workload scalability on this SQL query is mainly limited by contention on the "btr_search_latch" mutex. 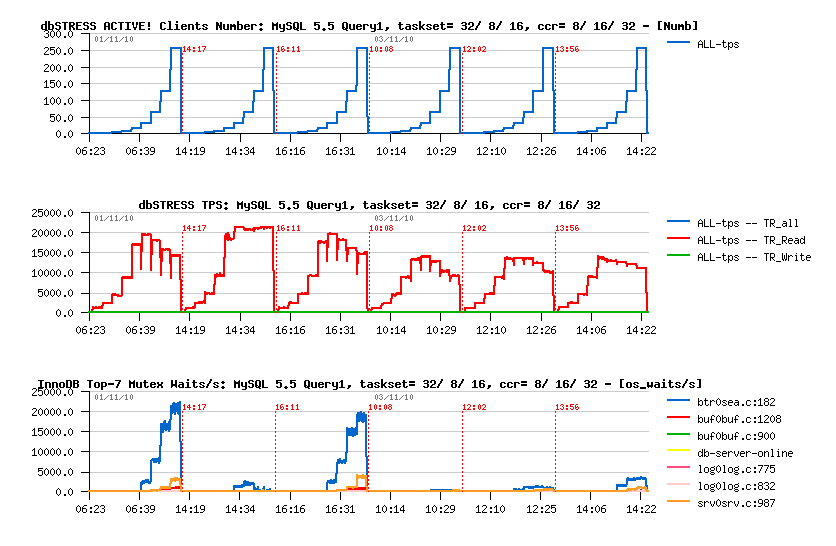 This query is limited by the "buffer pool mutex" and "the kernel_mutex" contentions. 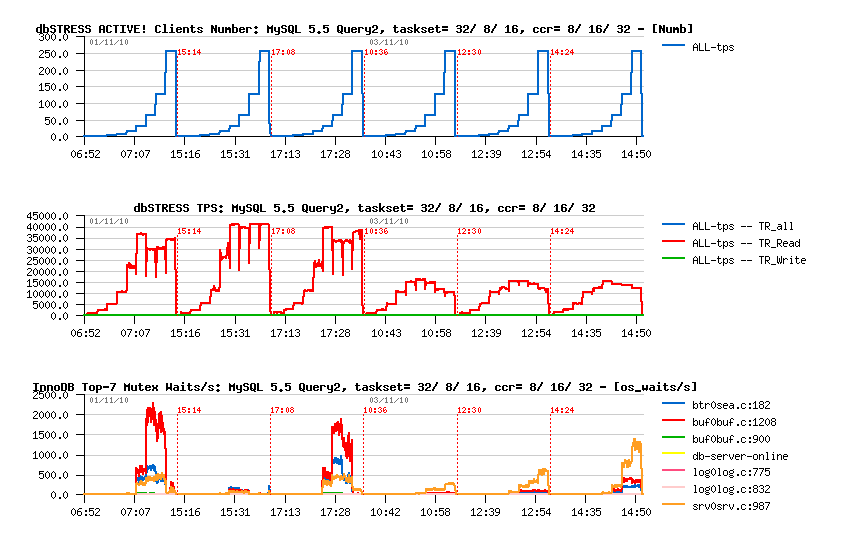 This query is manly limited by contention on the "kernel_mutex". 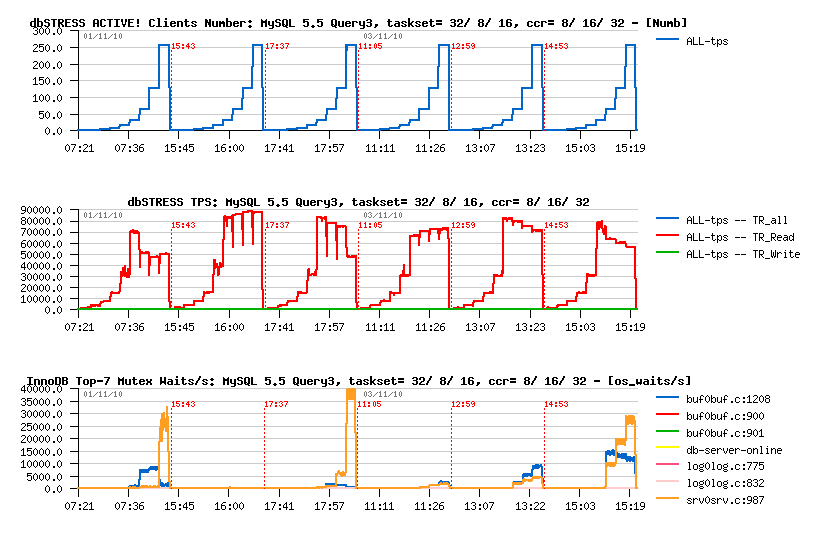 I was curious to replay the same workloads also on XtraDB 9.1 - but NOT in goal to compare it with MySQL 5.5 (otherwise I have to use the latest XtraDB version, and it's not the case) - my interest here is to see the impact of the "innodb_thread_concurrency" setting but when the "timer-based" concurrency model is enabled! - this model was introduced within MySQL 5.4, ported by Percona team into XtraDB, but was finally not included within MySQL 5.5. However on its time this model was near free of locks, and as XtraDB 9.1 was comparable in performance with MySQL 5.5.4, I was curious to know if we did not miss anything within the latest releases of MySQL 5.5.. 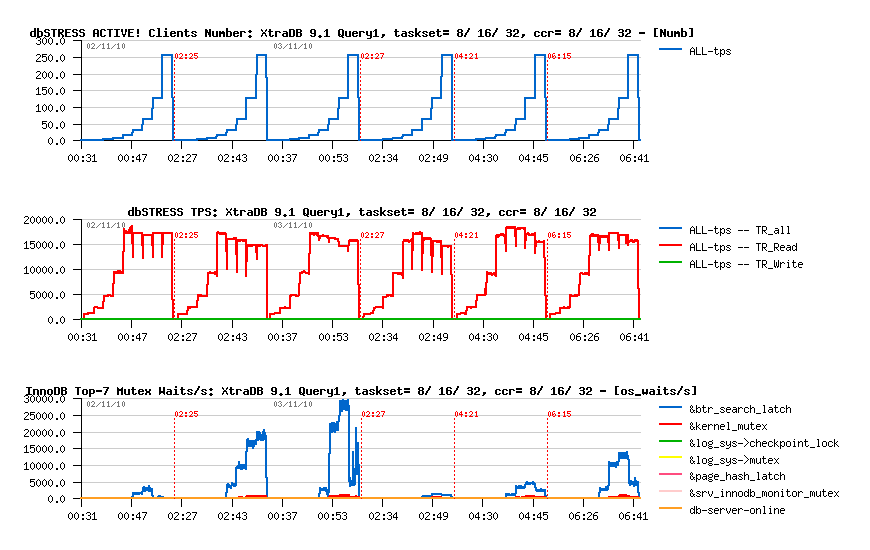 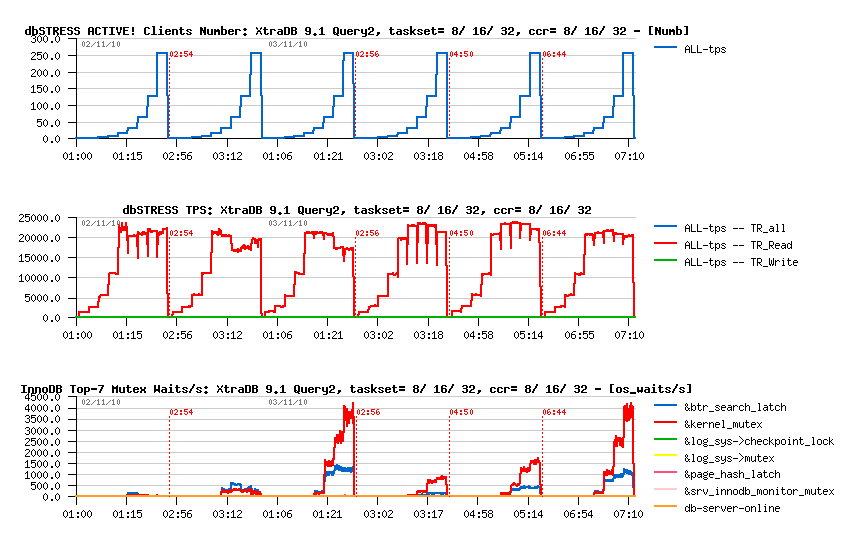 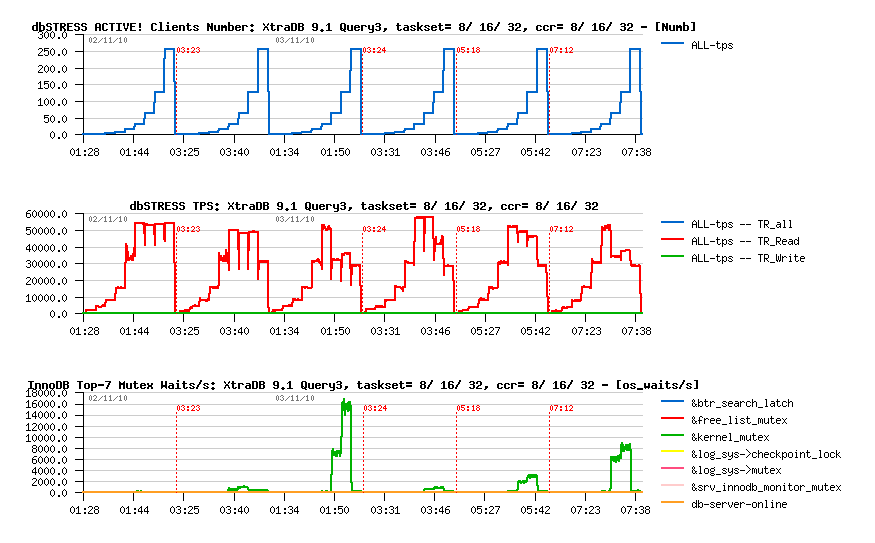 So far, until now from the previous tests globally the most better results are obtained within an 8 cores task-set configuration. But what will happen if I have more than 256 concurrent user sessions?.. - in the past this test was impossible to run successfully having "innodb_thread_concurrency=0" whatever a number of CPU you have.. Well, of course, a system having 1600 concurrent users is usually has not the same workload profile as a non-stop 1-256 users tested before.. The main difference here will be with a presence of a "think time", which means that each user will do a pause between transactions (simulation of user actions, ex. reading a web page, etc.).

Before I've executed 1600 users test with a think time=1sec, which means that if everything is going well, each user should be able to process one transaction per second, and with a growing number of concurrent users we have to reach finally 1600 TPS. However, without limiting InnoDB thread concurrency it was impossible to reach this level before, and the following results were true just 2 years ago tested on different MySQL versions:

All details about these 2 years old results you may find in this report . As you can see, setting "inodb_thread_concurrency=8" solved the situation and guaranteed a stability within an execution order! - so each user was able to run on the one transaction/sec speed.

Curiously reaching 1600 users sessions on the Linux box was not without surprises..

So, what about results?.. 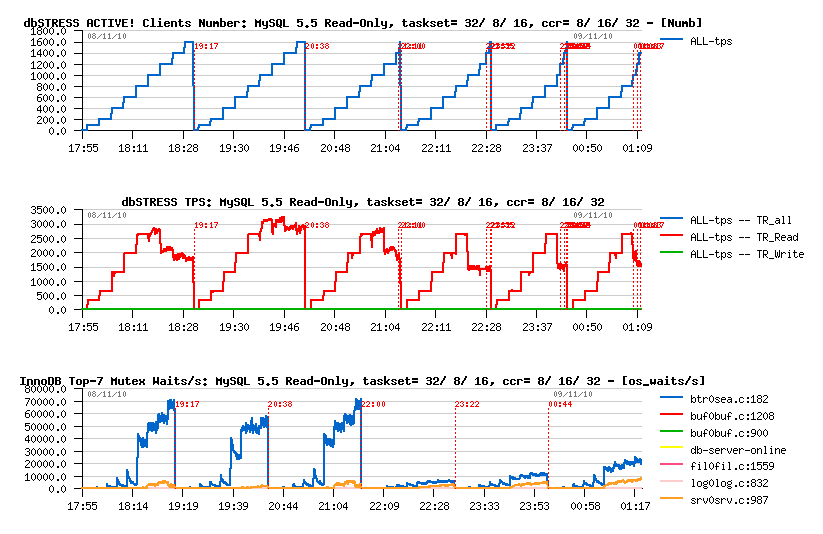 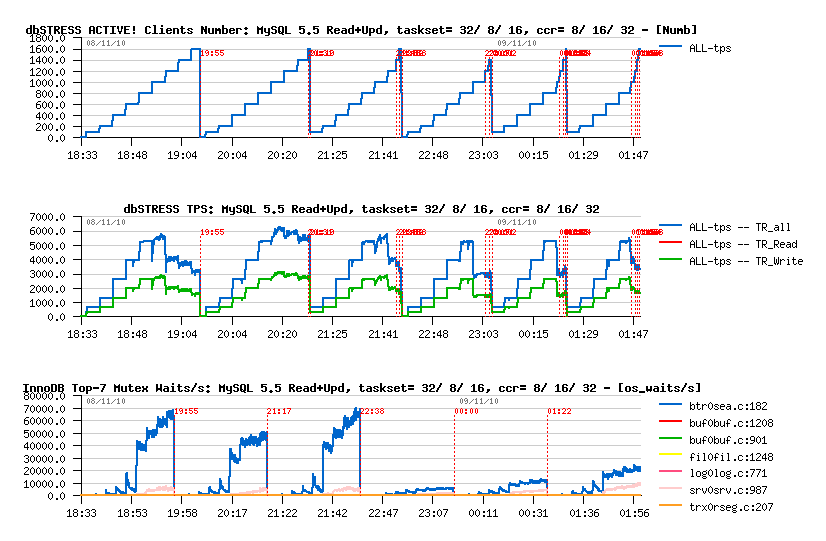 Of course, having free of locks and highly scalable MySQL+InnoDB code will resolve most of described problems! - but I think it's not yet for tomorrow.. ;-) and anyway, even if you're using a scalable database engine like Oracle you may still seek for a solution of connections pool limiting the amount of active tasks on your server.. - so I'm voting for an advanced Thread Pool for MySQL! :-)

Any comments are welcome! ;-)

Posted by Dimitri at 14:27
Categories: MySQL