It's now over a year when there was a quite interesting exchange with Vadim and other Percona guys due their TPCC-like benchmark results on MySQL 5.5 - I've replayed on that time the same tests, but with a better tuned configuration parameters to demonstrate that with a little bit more love, MySQL 5.5 may keep TPCC-like workload very well ;-)) However, it was clear that Adaptive Flushing in 5.5 needs some improvement (which is now implemented in 5.6), but there were also several open questions regarding I/O level and O_DIRECT performance which I was able to clarify for me only during last year IO testing on a decent Linux box + storage..

Summarizing all this stuff, you may understand my curiosity to see how well (or not) MySQL 5.6-labs is running today on Percona's TPCC-like workload ;-))

But let's start from the system setup first:


Same TPCC-like workload as before:

Then, my first test will be with MySQL 5.5 - even it's GA since more than one year and no any major changes allowed to the code, it was still improved over a time and will give us a good idea about its state for today.. From the previous testing I've retained that to help Adaptive Flushing in 5.5 the "innodb_io_capacity" value should be set to a something huge -- as the algorithm in 5.5 is not following very well the REDO activity, we should avoid to limit it in IO capacity (and when it'll decide to do a big I/O request we should let it happen ;-))

Note that I did not reduce this time the dirty pages percentage to enforce the dirty pages flushing - I'm expecting here that my I/O level will be fast enough to keep the flush activity aligned with REDO logs.. Let's see what is the result now ;-)

Observations : Also, I did not write this blog post intentionally for 5.5 (my main goal was to test 5.6-labs), but I'm surprised to not see here huge drops and frozen activity for long amount of time observed and reported by guys from Percona and TokuDB.. - sure there are also QPS drops on my graphs too, but it's nothing comparable to what was reported by others.. Maybe with a little bit more love you may also reach a better and more stable results?.. ;-)

Well, lest move to MySQL 5.6.4 now - it was the last 5.6 release just before 5.6-labs, so Adaptive Flushing was still very similar to what we have in 5.5 (even if some improvement, like page_cleaner thread, were introduced).. So, nothing different within 5.6.4 configuration setup (same 20K IO capacity), except monitoring via METRICS table is enabled. 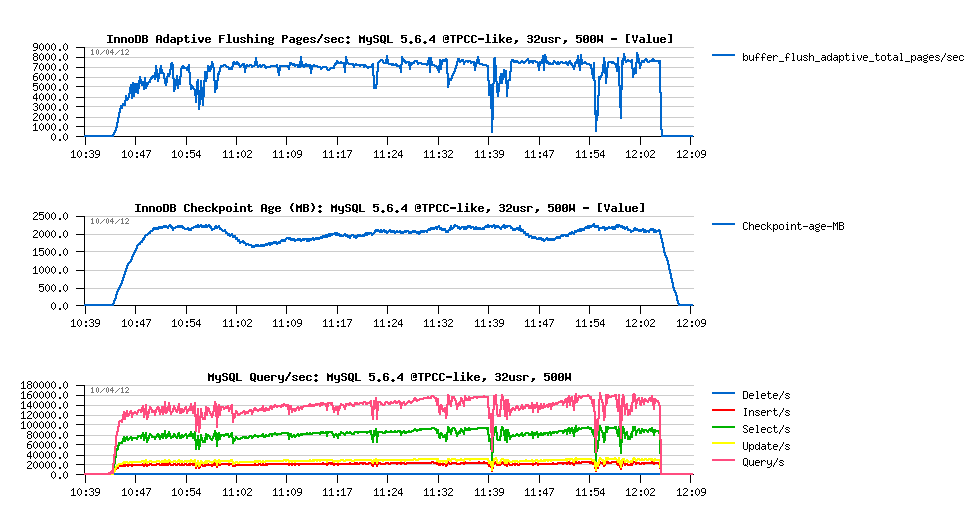 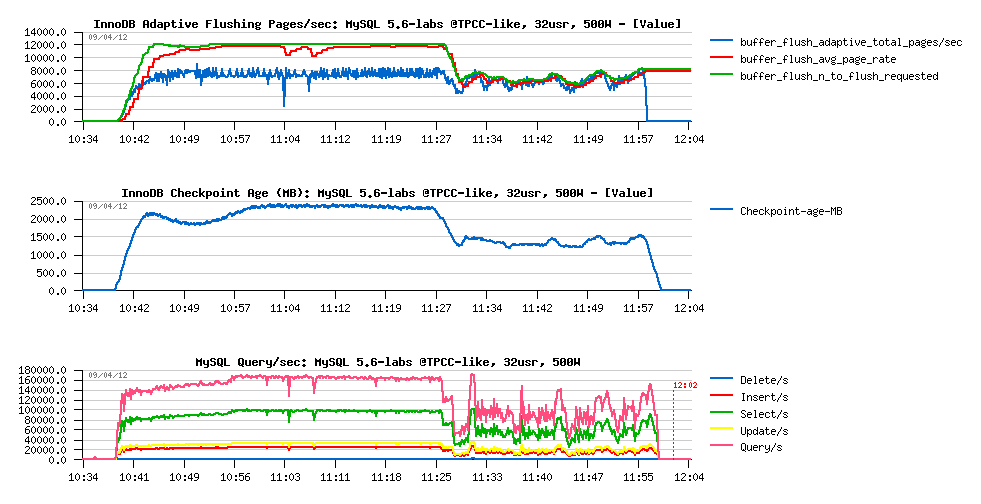 Well, I'm pretty happy with what I saw.. (except the memory leak bug of course ;-)) -- but I see now the potential we're having under 5.6-labs.. And with all other further improvement which are currently in pipe, MySQL 5.6 should be again yet another the best ever MySQL release after 5.5 !..

Posted by Dimitri at 12:39
Categories: MySQL