Last week I was faced to a strange problem while benchmarking MySQL 5.6: some of my user sessions become "frozen" periodically and finally my whole test was not valid..

But the problem is completely "random" - it's not happening all of the time and not in all users sessions. And every time I'm executing EXPLAIN for any given "wrong" query - it's always giving me a right execution plan.. So, seems that something is going wrong on the time when queries are executed concurrently, and not when I'm trying to analyze them alone. Which means that I have to catch the execution state exactly on the time when the execution plan is wrong!..

How to do it?.. - since MySQL 5.6 there was an Optimizer Tracing feature introduced which is helping a lot to understand the reason of choices made by optimizer. There is a good short HOWTO available on the Forge MySQL. While regarding my stress code, I have to add the following queries after CONNECT for my user sessions:

And then in case if in the user session the last executed query took more than 60sec, user then executed the following query to save the last query optimizer trace into a file:

As it's much more simple to read this trace from a file rather SELECT output ;-))

So far, all my 32 concurrent users were now running with Optimizer Trace enabled (currently the trace may be enabled only from the session itself, there is no any global setting available for security reasons). And very quickly I was able to get trace files for my problematic cases! What is great that the trace is containing the whole SQL query in question, so it was very easy then to replay the same SELECT query and obtain the optimizer trace when this query is executed with a right plan. Then simply compare two traces, easy no? ;-)

Skiping all details, the source of problem is shown by the following lines:


But my "problematic" workload was more I/O-centric rather CPU-bound (even CPU was used near 100%)... So, what will be an overhead in the "most worse" case when the workload is more CPU-bound and queries response time is less than 1ms?.. ;-)

Let's get a look on the following graphs representing 3 test cases: All tests were executed with 32 concurrent users on 12 cores server.


So, keeping in mind these degradation levels, I'm pretty ready today to add ahead in my code of all perf tools an option to enable Optimizer Tracing on demand! - such a feature added in to any application using MySQL may save you days of debugging! Then, even 20% of performance degradation is nothing comparing to difference in bad response time.. And if I'm tracing only one user session, the global performance degradation will be less than 1% ;-) while 20% difference on a web application (for ex.) you may even not see, as the network latency sometimes may give you even more surprises ;-))

And seems that Persistent Statistics in InnoDB is the must! It just needs to have a solution for the most straight forward adoption on the user land..

BTW, did you try already these features?.. You should ;-)

Any comments and feedbacks are very welcome!..

Other resources to read:

It was a long time now that I wanted to run some benchmark tests to understand better the surprises I've met in the past with Linux I/O performance during MySQL benchmarks, and finally it happened last year, but I was able to organize and present my results only now..

My main questions were:


There were already several posts in the past about impact on MySQL performance when one or another Linux I/O layer feature was used (for ex. Domas about I/O schedulers, Vadim regarding TPCC-like performance, and many other) - but I still did not find any answer WHY (for ex.) cfq I/O scheduler is worse than noop, etc, etc..

So, I'd like to share here some answers to my WHY questions ;-))
(while for today I still have more questions than answers ;-))

First of all, the system I've used for my tests:

Then, my initial test plan:

Implementation of raw devices in Linux is quite surprising.. - it's simply involving O_DIRECT access to a block device. So to use a disk in raw mode you have to open() it with O_DIRECT option (or use "raw" command which will create an alias device in your system which will always use O_DIRECT flag on any involved open() system call). Using O_DIRECT flag on a file opening is disabling any I/O buffering on such a file (or device, as device is also a file in UNIX ;-) - NOTE: by default all I/O requests on block devices (e.g. hard disk) in Linux are buffered, so if you'll start a kind of I/O write test on, say, your /dev/sda1 - you'll obtain a kind of incredible great performance ;-)) as no data probably will not yet even reach your storage and in reality you'll simply test a speed of your RAM.. ;-))

Now, what is "fun" with O_DIRECT:
Interesting that the man page is also quoting Linus about O_DIRECT:
"The thing that has always disturbed me about O_DIRECT is that the whole interface is just stupid, and was probably designed by a deranged monkey on some serious mind-controlling substances." Linus

And if you need an example of C or C++ code, instead to show you the mine, there is a great dev page on Fusion-io site.

So far, what about my storage performance on the RAW devices now?..

Test scenario on RAW devices:
NOTE: I'm using here 1K block size as the smallest "useful" size for databases :-)) then 4K as the most aligned to the Linux page size (4K), and 16K - as the default InnoDB block size until now.

Following graphs are representing 9 tests executed one after one: cfq with 3 different block sizes (1K, 4K, 16K), then noop, then deadline. Each test is running a growing workload of 1, 4, 16, 64 concurrent users (processes) non-stop bombarding my storage subsystem with I/O requests. 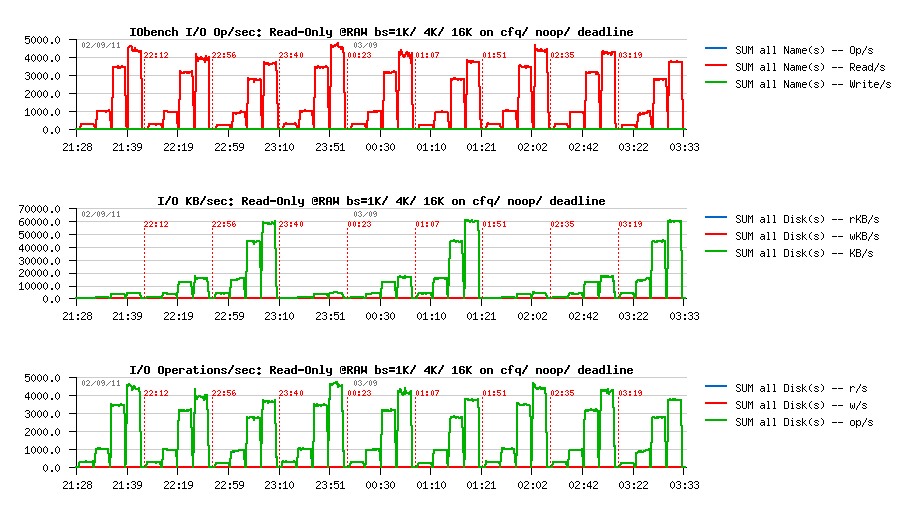 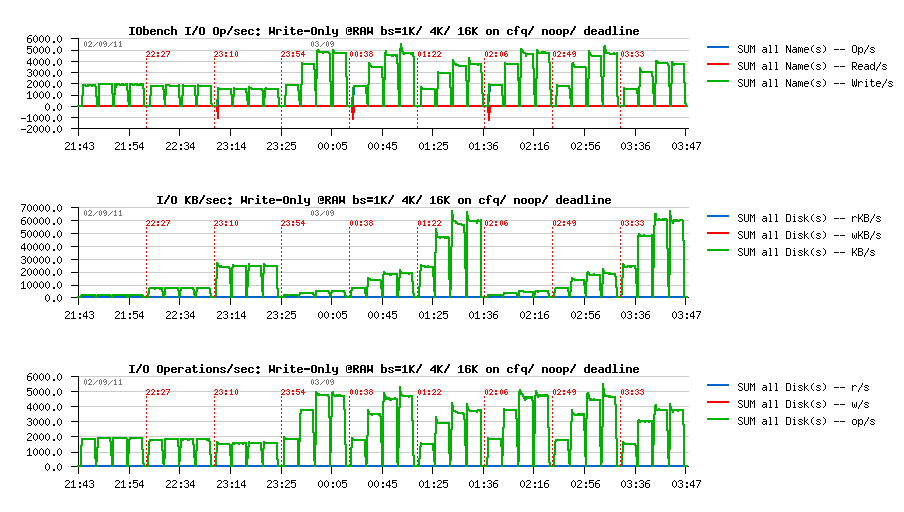 To check which I/O scheduler is used for your storage device:
# cat /sys/block/{DEVICE-NAME}/queue/scheduler

For ex. for "sda": # cat /sys/block/sda/queue/scheduler

As you understand, there is no more reasons to continue any further tests by using "cfq" I/O scheduler.. - if on the raw level it's already bad, it cannot be better due any filesystem features ;-)) (While I was also told that in recent Linux kernels "cfq" I/O scheduler should perform much more better, let's see)..

Also, we have to keep in mind now the highest I/O levels observed on RAW devices:
So, if for any reason Read or Write performance will be faster on any of filesystems - it'll be clear there is some buffering/caching happening on the SW level ;-))

Now, let me explain what you'll see on the following graphs:
So, let's start now with Read-Only results. 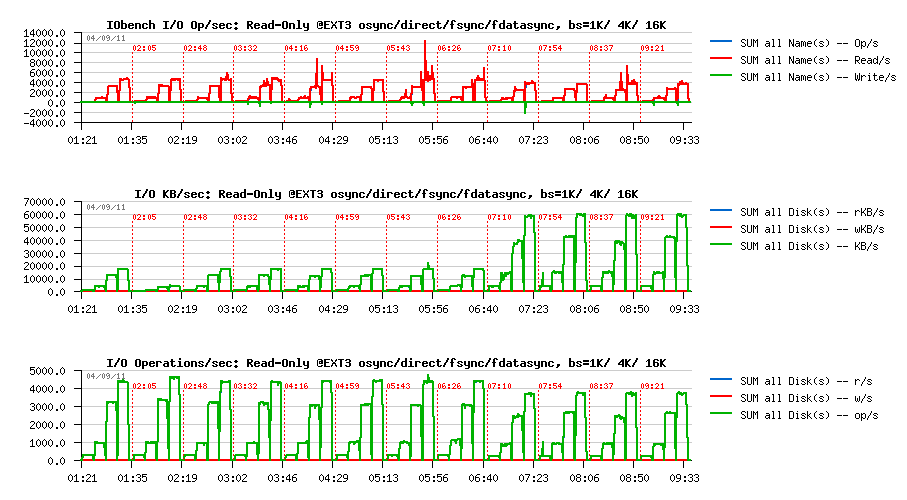 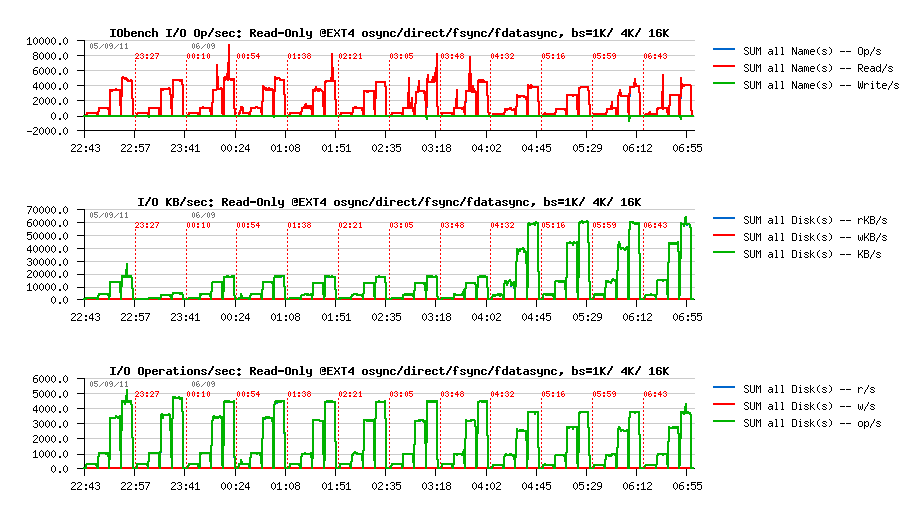 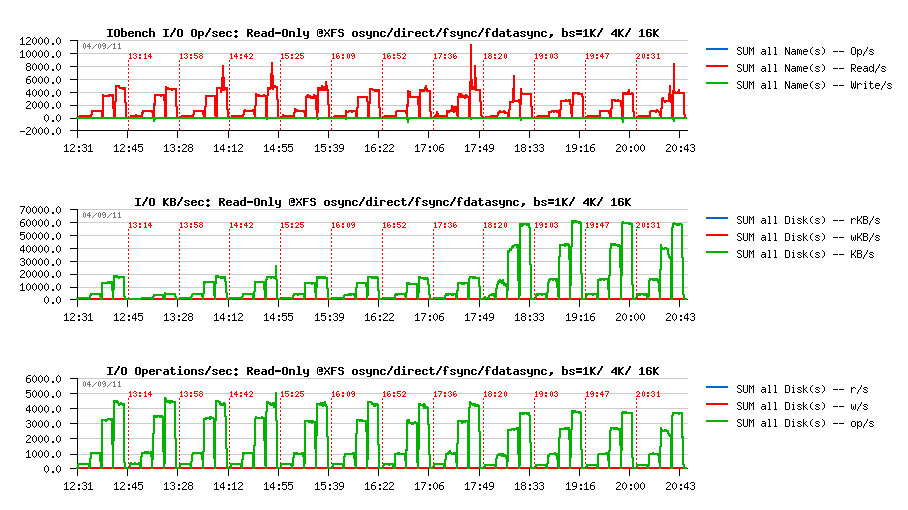 Observations :
While the results on Random Read workloads are looking exactly the same on all 3 filesystems, there are still some difference in how the O_DIRECT feature is implemented on them! ;-))

The following graphs are representing the same tests, but only corresponding to execution with O_DIRECT flag (direct). First 3 tests are with EXT3, then 3 with XFS, then 3 with EXT4: 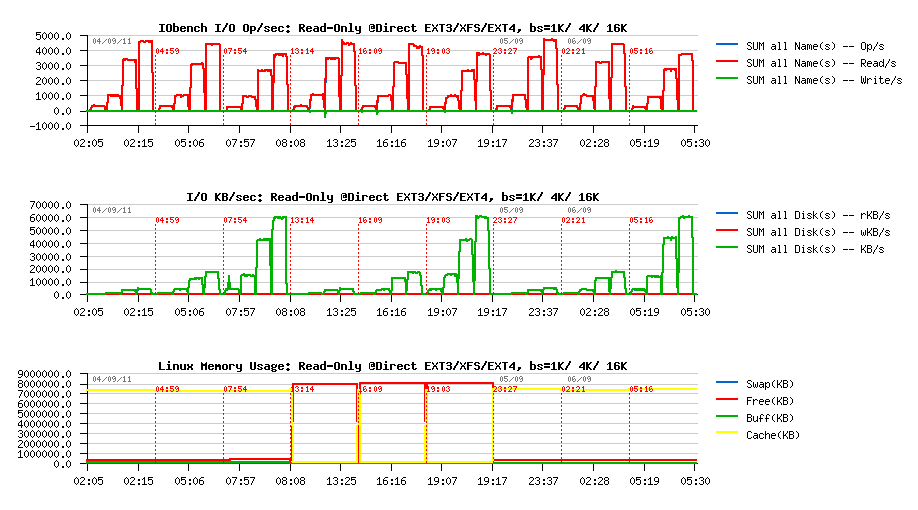 Well, let's see now what is different on the Write Performance. 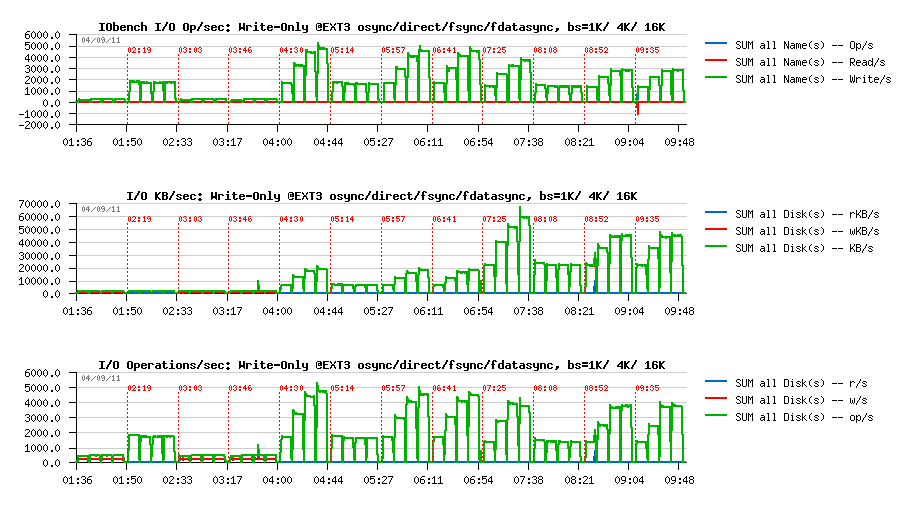 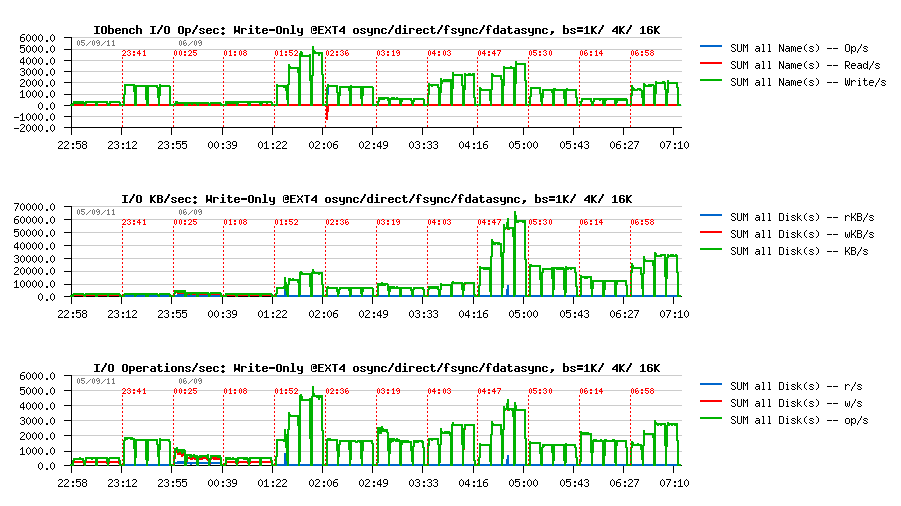 Observations :
What about XFS?.. 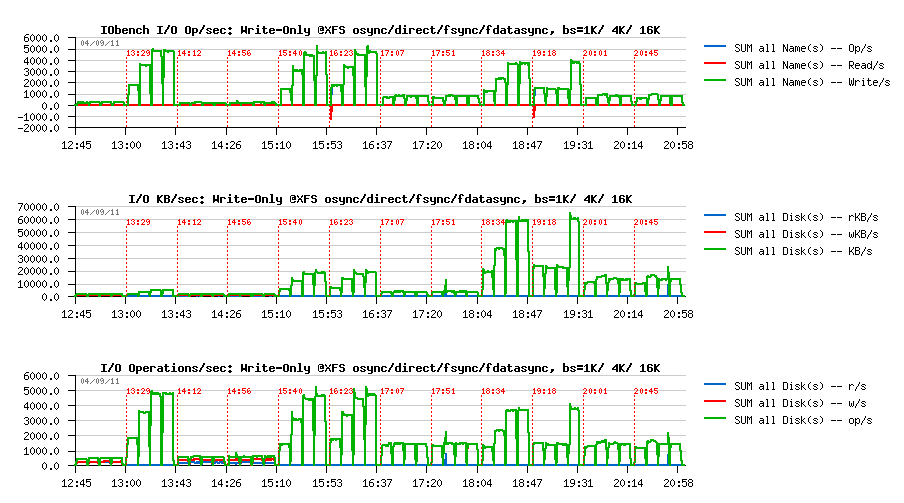 Observations :
Now, what is the difference between a "default" XFS configuration and "tuned" ??..

The results are following.. 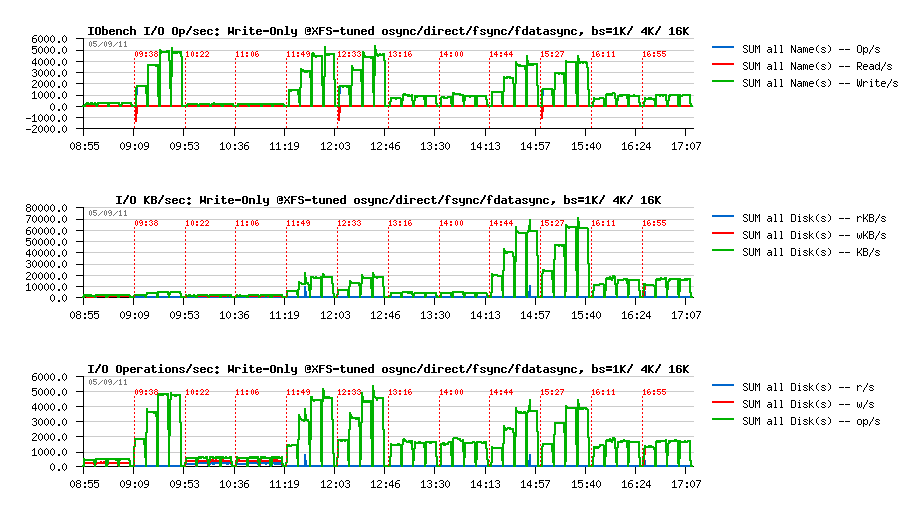 Observations :
Then, keeping in mind that XFS is so well performing on 1K block size, I was curious to see if thing will not go even better if I'll create my XFS filesystem with 1K block size instead of default 4K.. 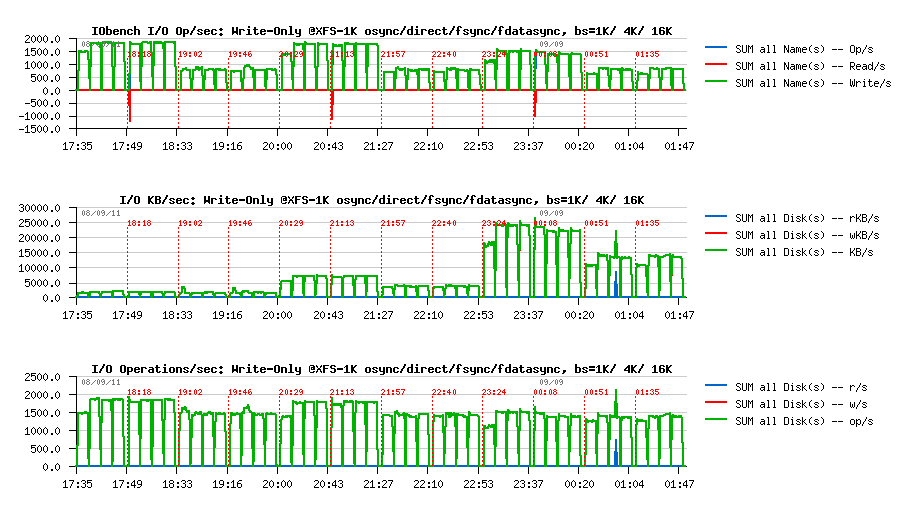 The answer is came from the Random Reads test on the same XFS, created with 1K block size. 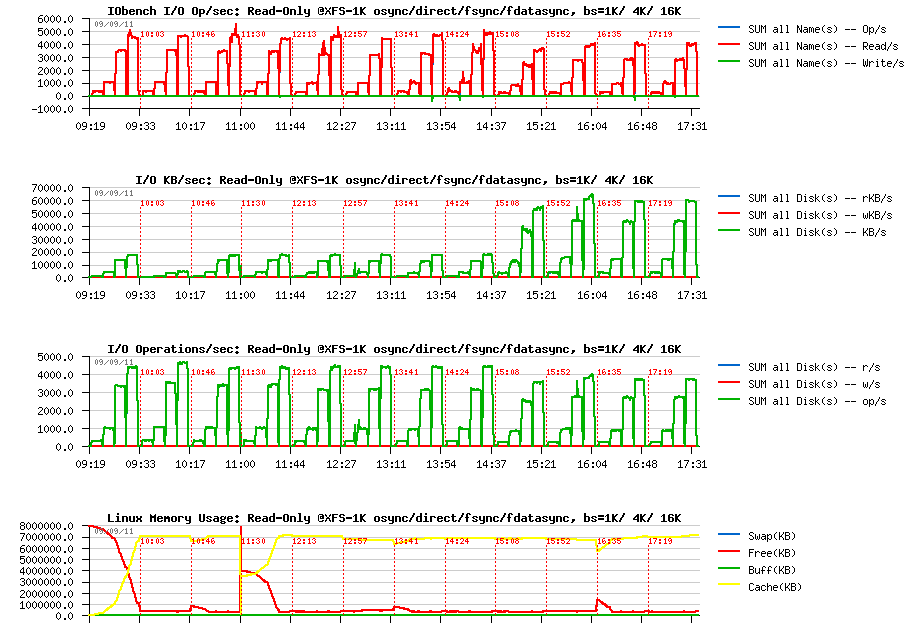 Observations :
Instead of SUMMARY
So far, I've got some answers to my WHY questions.. Will be fine now to get a time to test it directly with MySQL ;-)