Since 5.5 is announced as Release Candidate now, I'll not compare it with 5.1 anymore - I think there was written enough about the performance gain even since introduction of 5.4 :-)

From the other side, we want to be sure that the final 5.5 will be at least as good as 5.5.4 release, and here the feedback from real users with real workloads will be very precious! So, please, don't keep quiet! :-))

After that, few notes while testing MySQL 5.5 on dbSTRESS and points for discussions..

Last month I've got some time to focus on the Buffer Pool pages management I've observed many months before with older MySQL/InnoDB versions, and now was curious if I'll reproduce the same issue with MySQL 5.5.4 too...

Few words about the tested workload:

What I observed before is that even if every UPDATE is changing data in place, there is a continuous decrease of the free space in the buffer pool! - and over a time all the space is used by something else rather useful data, etc.. - means probably "useful data" are leaving the cache and filled by old page images, etc.

So far - yes, I've reproduced the same problem again and with MySQL 5.5.4 - and you may read all details about in the Buffer Pool and Purge report. But to make it short: it's once again about InnoDB purge - if purge is unable to follow your workload activity you may have many problems, and this problem is one of them :-))

I did not really think to publish this report before I have a detailed in depth explanation about everything is going on.. - But several things happened during this time:

Let me speak about the Linux kernel :-))

The changes came when moved to this kernel:

So my questions here:

I think sharing this information will help to focus on the right MySQL issues and combine best practice for every users :-)

Here is a small graph commenting my observations. 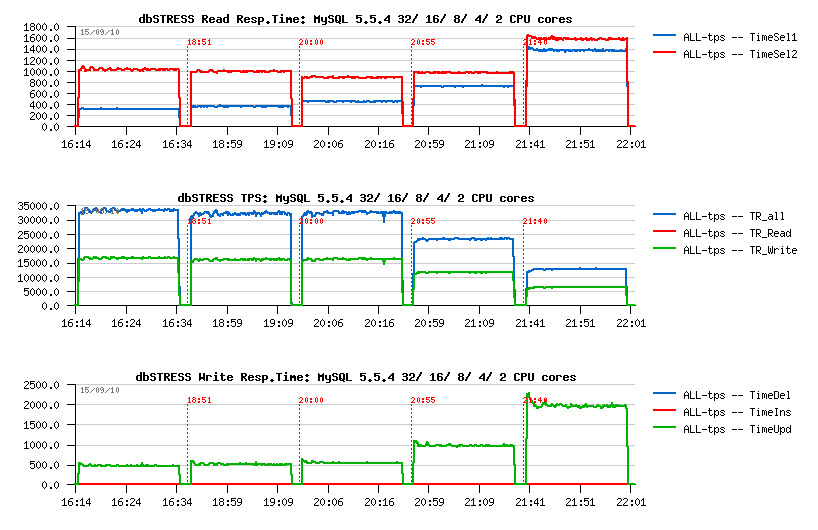 There were many discussions about dirty pages flushing in 5.5 since UC2010 in April.. - On some workloads the flushing was too aggressive.. On some not aggressive enough..

Well, the 5.5.6 is came with a more "relaxed" (less aggressive) flushing which will depends a lot on your workload. And probably in many cases it'll be just fine..

As you can see on the following graph, the 5.5.6 may miss a performance stability on the aggressive workload (like dbSTRESS):

To recognize if you meet such an issue you have to monitor your Checkpoint Age in parallel with your workload activity - and if Checkpoint Age drops are corresponding to your activity drops + I/O write activity spikes = probably you're here ;-)

Well, it was aggressive, but in memory workload.. - Let's see later what changes when the workload is IO-bound ;-))

Usually I'm compiling myself my MySQL binaries for testing, but now was curious if there any difference in performance between an "official" binary and compiled from the sources: 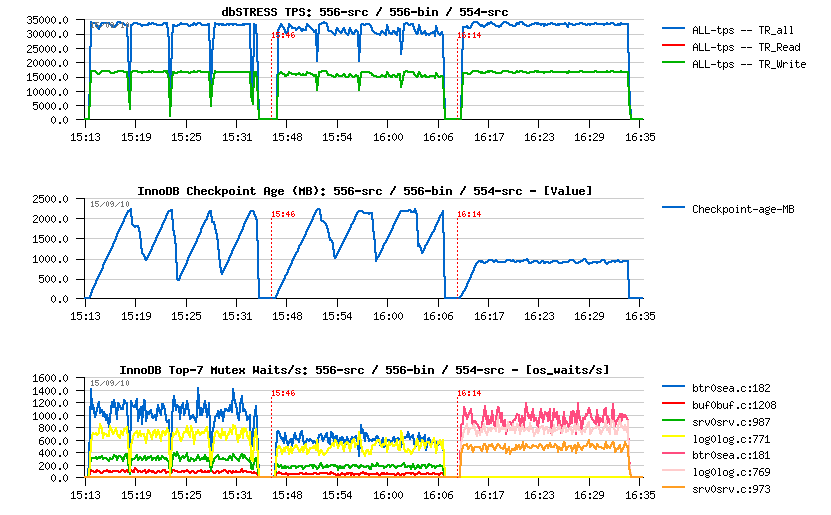 What is interesting, that on the same workload 5.5.6 is keeping better the higher workload comparing to 5.5.4 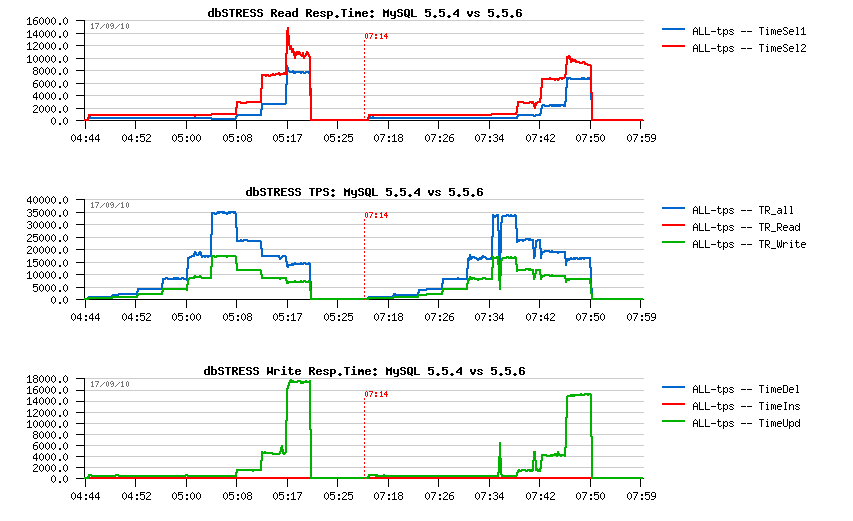 From the previous graphs you may see that since 32 concurrent users/sessions there is a continuous drop in performance, and you may say - it's as expected as the innodb_thread_concurrency is set to zero. In the past to fix such an issue the solution was to set the innodb_thread_concurrency to something different from zero - for the 5.5 the most optimal value was 32 until now. The problem here is that everything as usual depends on the workload.. - And in my case, the overhead of innodb concurrency management is out-passed the potential gain! (since all performance improvements made in 5.5 its overhead may become more visible than ever)..

The overhead of the concurrency management in InnoDB is not something new - I've presented 2 output examples few years ago of the top locking on MySQL reported by Solaris "plockstat" (derivate from DTrace) - Lock waits reported by Solaris . You may see that once concurrency setting is not zero, the 'srv_conc_mutex' moving to the first place.. It was on the pre 5.4 era yet, but I don't think the concurrency code changed too much since that. And correct me if I'm wrong, but seems the waits on this mutex are not reported by "mutex status" output as it's created via "os_fast_mutex_init(&srv_conc_mutex);", so not listed in innodb mutexes and that's why I don't see it at all during monitoring (and I think the same for the same reasons it should be invisible for Performance Schema too) - and if it's so, it should be fixed..

Now, looking more in details for the observed performance difference - the following graph is representing a step by step growing dbSTRESS workload from 1 user to 256 (1,2,4..256): - on the left side 5.5.6 is running with innodb_thread_concurrency=0 - on the right side: set to 32 - changing the value of tickets is not helping here as transactions are very short and fast (that's why probably the overhead is seen so well too, don't know).. 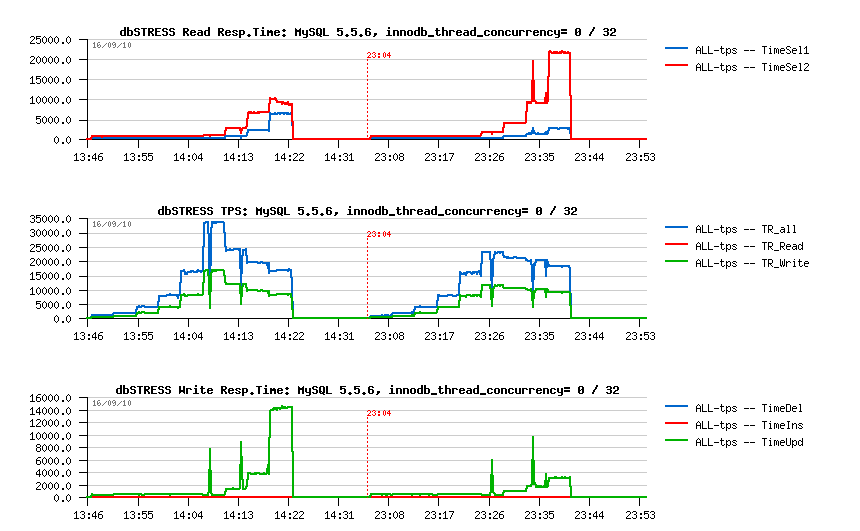 So, for the best performance results you're better to keep active sessions in your database under 32 and then set innodb_thread_concurrency=0. For example you may use an application server connection pool or other 3rd party solutions.. - nd of course having a thread pool inside of MySQL will be the most optimal :-)

Otherwise, if you may have many concurrent user sessions running on the same time you may always try to change innodb_thread_concurrency from its zero default value - this setting is dynamic, so you may quickly check the result without restarting your database server and then compare which setting is better adapted for your workload...

Well, until now I've focused my attention mainly on the in-memory workloads - in many cases on IO-bound workload you're simply testing your storage array performance and it doesn't help to improve MySQL performance :-)) However, now I my database is placed on the SSD disks! - how much it'll help in my workload?..

Let's start first with Read-Only workload as it's the most simple one :-)

To make my workload IO-bound I'll just reduce the AntiDEAD setting in dbSTRESS scenario (to avoid deadlock exceptions during the test, dbSTRESS has an AntiDEAD option: it gives an interval of ID to be used by each user/session, and avoids artificial deadlocks during testing). On the same time by this setting you may reduce or increase the quantity of pages which will be covered by randomization algorithm..

So far, reducing AntiDEAD from 2000 (default) to 200 I'm increasing by x10 times the number of pages accessed during the test. Other scenario settings remain the same:

The following graphs are representing the observed 3 workloads in the same order: 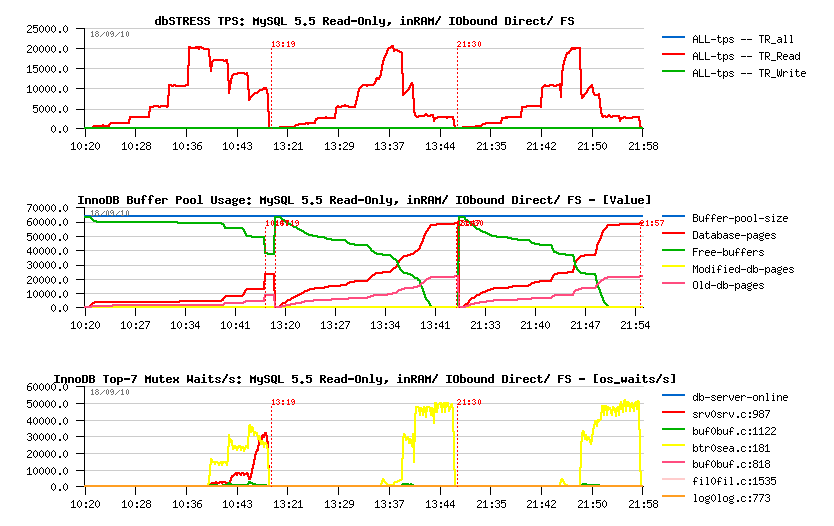 Seems things a directly depending on the page operations - with a smaller (8G) Buffer Pool performance become even worse and TPS will be limited to 10K only.. With 32G pool it's sligtly better, but in many cases you cannot put your whole database into your Buffer Pool, so there is definitively something to do here..

As you may imagine, Read+Write workload will suffer the same problems once it become IO-bound, but what is interesting that the main issues are READ transactions (as expected).. 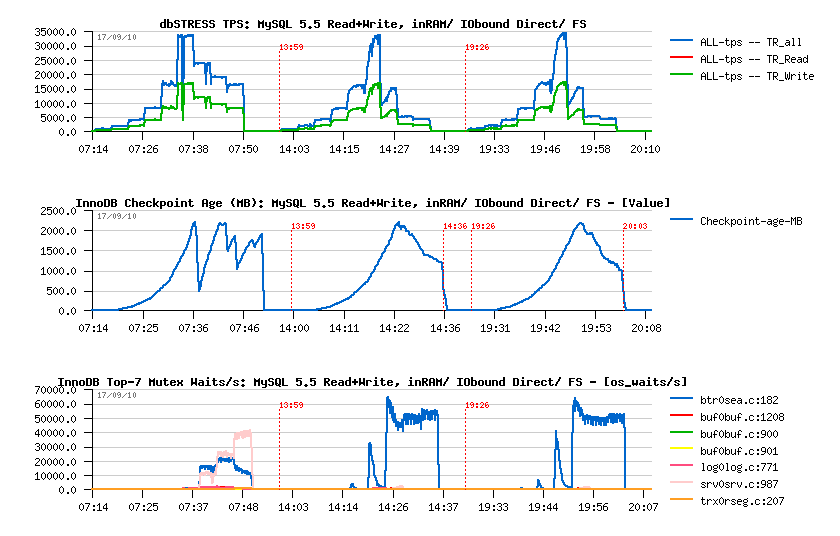 It's quite curious to see how performance may vary depending on your data and I/O pattern..

Some points to consider:

So I think we have to focus on how to speed-up the pages read within InnoDB, because even the Read-Only may look not perfect for the moment..

All other details about present materials you may find in the final benchmark report: MySQL 5.5 Notes..