MySQL Performance: Why Ahead Flushing for InnoDB?...

Recently I've done several performance studies to find the most optimal way to fix the "furious flushing" observed during all my benchmarks with InnoDB. The initial report about this work you may find here including initially proposed patches. But analyzing test workloads with the latest MySQL performance build I think there is a need to go more far...

First of all let's me present you the result I've got on the Read+Write workload @dbSTRESS - first part of graph represents the TPS level obtained with MySQL 5.4, and the second part - with the latest MySQL performance build (#46):

This Read+Write workload is running non-stop during one hour within the same conditions in both cases:

As you may see, reaching 10,000 TPS over 6,000 represents a huge gain! 66% to be exact. On the same time you may observe even more pronounced periodic performance drops due "furious flushing" (see also previous posts ).

The worst case during a high Read+Write activity on InnoDB arrives when the redo log has no more free pages! What does it mean?.. - it means that the oldest redo log data are still referencing on that moment to some modified (dirty) pages which are still kept in the Buffer Pool and these pages are still not flushed to the disk! So, redo log cannot recycle the oldest blocks until the oldest pages are not flushed!.. As you may imagine, what's going next? - At any price redo log should obtain free blocks to continue working (otherwise you may observe a total freeze of your database activity). So at any price it involving dirty pages flushing as fast as possible - it calls buf_flush_batch() function - and from my observations it may call it more than several thousands per second(!) - so we are far away here from respecting a system I/O capacity or other limitations - the goal here is to avoid a database activity freeze at any price!..

However, a short freeze is happening anyway - and as the result we may observe a periodic performance drops (my stats simples on the previous graph where 10 sec - and on the lower time interval it may be seen probably even better)..

Any solution currently implemented to deal with such a problem?..

BUT! As I demonstrated previously , on the really high Read+Write workload the Master Thread is never leaving a purge loop, so the innodb_max_dirty_pages_pct settings is never checked, as well Adaptive Checkpoint code (as it currently implemented) is not reached either...

Supposing the purge loop is really necessary by design, my idea was to add a sort of "Ahead Flushing" inside of the purge loop. Why inside?.. - Until while Master Thread is leaving purge loop at least everything is still working as expected. The problems are coming when this loop become infinitive! :-)

My initial solution contained just 2 lines to add into the purge loop:

Which means: if the current level of dirty pages percentage is reached a half of the dirty pages limit setting - flush the next part of dirty pages aligned with 20% of I/O capacity settings.

Of course such a code changes is preferable to be optional and enabled via my.conf settings (for ex.: ahead flusing on/off, starting dirty pages percentage, how much of I/O capacity to use, etc.).. Then spending hours discussing with Mikael the probe patch was born - it's adapting automatically the flushing frequency according to the reached dirty pages percentage level and also respecting the max I/O capacity settings given by the user (Mikael absolutely insisted on this point)... Sounds very good! The only problem - it seems to be too light yet to face the "furious flushing" observed during the high Read+Write workload! And with the latest performance build the flushing become truly "furious" :-)

To go further, instead of the "light" solution I've added my initially proposed changes into the latest performance build and here is it what I've observed (first part of graph is corresponding to the default code, the second one - with added Ahead Flushing code):

It's still not optimal yet, but looks better then default:

There are also positive changes on the checkpoint age and log writes stability: 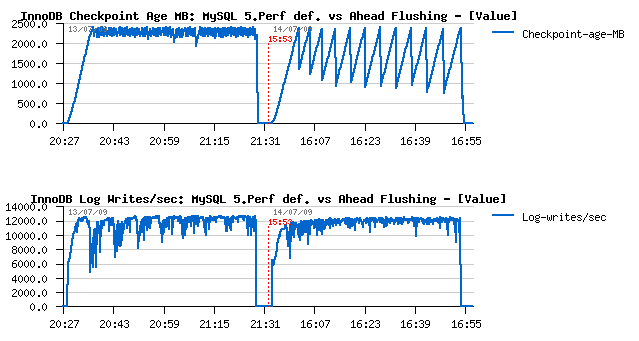 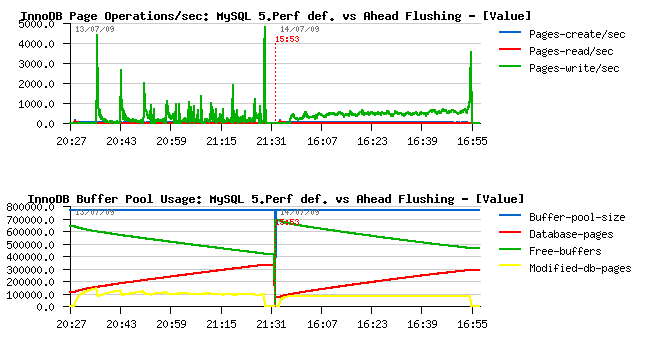 Well, it's already looks good, but should be much more better :-)

Looking for the optimal solution

Even this topic was covered several times already, the question is still open - use or not to use InnoDB thread concurrency?.. And the only true answer here - "It depends" :-) and I'll try to make a short summary about the current state here.

The main current InnoDB bottlenecks are all mostly due to a high contention on internal locks. As all multi-threaded (as well multi-process) applications giving a concurrent access to its resources, InnoDB have to guarantee there is only one thread may modify a given resource on the same time. This guarantee is achieved by locking a resource in exclusive mode and implemented with mutexes. Depending on implementation, some locks may become very hot with a growing access concurrency. And it's exactly what's happening with InnoDB...

Things where improved a lot with Google patches and continuing with MySQL 5.4 version. But even if several lock bottlenecks were successfully removed, the lock contention is still here. Why it's a problem?.. - Usually when you have any kind of lock contention it's never linear! And with a growing sessions/users concurrency you may observe a dramatic performance drop (like your 32 users will work slower rather only 2, etc.)..

When you deal with inevitable locking which in any case cannot be avoided, but you still expect to keep the highest possible performance level AND growing workload - the only possible solution you have is to reduce a concurrency on the hottest locks. That's why I'm a part of people who thinking that InnoDB thread concurrency option is a very good feature! :-) I've already wrote  about why, and here will just stop on two current InnoDB thread concurrency models:

The default model was greatly described  by Percona Team. In short InnoDB places all threads (sessions) into its execution wait queue and keeps no more than a given number of active threads on the same time (set with innodb_thread_concurrency=N option).

Introduced within MySQL 5.4, this model is looking very promising and performs much more better! And you may read from Mikael's blog how exactly it works .

As usual, one image says more than many words:

Main problem of both models

But both models are still suffering of the same problem: when any of "active" threads (sessions) is doing an I/O operation (disk read) it continues to keep its "active" state (and I/O operation may take tens ms(!)) - while another session may during this time already get its data cached from a buffer pool and finish its query!... So sometime you may observe a significant global performance drop during a such moment!.. - Ideally each session before doing an I/O operation should remove itself from an "active" state and leave others working. So, there is still a room for improvement :-)

Recently new performance builds were made by our MySQL Team, and it seems to me reaching now a new milestone with the build #45 - within this single build Mikael joined several previously tested performance builds showed a positive performance improvement. So, how well it's comparing now to the default 5.4 ?..

Here are my results obtained on M5000 (quad-cores)/ Solaris10 update7 and db_STRESS.

Special note about update7: I was pleasantly surprised the kernel locks issue was gone! CPU Spinlocks within a similar workload are devided by 4(!) - very positive improvement, and seems the things will be even better with update8!

For my big surprise there was no difference (or very few) between 5.4 and build45 on the Read-Only workload. I need to retest it again after vacations to be sure nothing goes wrong here :-)

However the performance improvements made on write operations are quite important!

As you may see, there is still a performance drop in the middle of the test - it's due a "furious flushing" while using a huge redo logs (described before ). There are new changes coming to face such kind of issue as well some others - stay tuned! :-)

This is a mainly maintenance update release, just to fix all trailing issues before a big move to the v.9.0 :-))

Also, since this 8.3 version dim_STAT is moving to GPLv2 license! Most of source code will be published in parallel with binaries - and with time you'll probably find it ported on any platform, even Mac :-)

As well several things are added to simplify a knowledge sharing between dim_STAT users:

And finally following users requests a "Donate" button is added for those who wants to support the development of this project and see new features coming faster! All credit cards are accepted! :-))

As usually you may download both versions (Solaris & Linux) from http://dimitrik.free.fr