MySQL Performance: What are your top-5 performance issues?..

This article inspired by benchmark results published by Alexey @Percona related to the "trx_list" modifications came with latest Percona Server 5.5. I was particularly curious about this feature, because the exactly the same solution was rejected by Sunny two years ago while analyzed this kind of problems (described within presented bug report and others)..

But well, one real test result is better than many discussions, so let's see what kind of results I will get on my own server. I'll test the same OLTP_RO Point-Select workload using 8 tables (by running 8 Sysbench processes in parallel). I'd say that this kind of load was initially pretty problematic for MySQL 5.6, as queries here are very short and running particularly fast. So, the idea of Read-Only transaction feature coming in 5.6 initially because of this workload, before being useful in other cases as well.

So, lets try the first case when transactions are not used and user sessions are using auto-commit (which is automatically will use Read-Only transactions in 5.6). The following graph is representing OLTP_RO Point-Select test on 16cores (MySQL server is running within a taskset with 16cores HT-enabled): 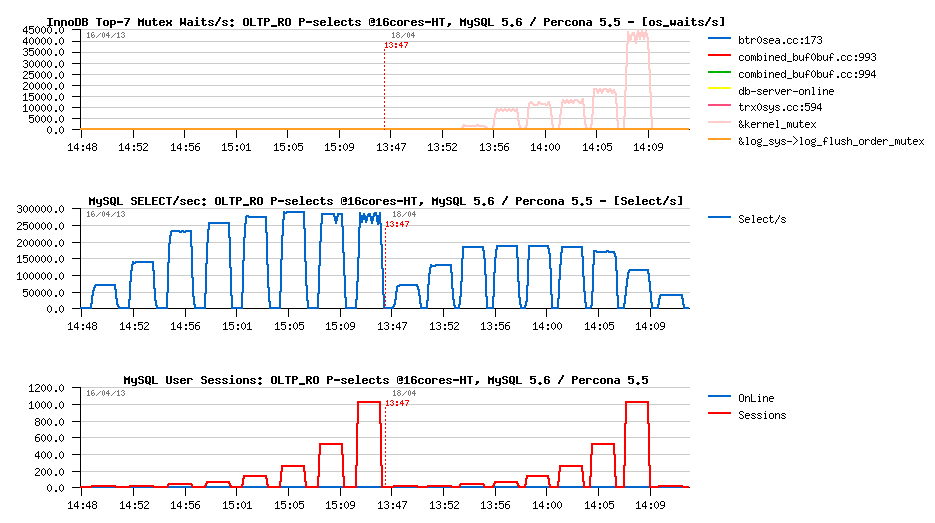 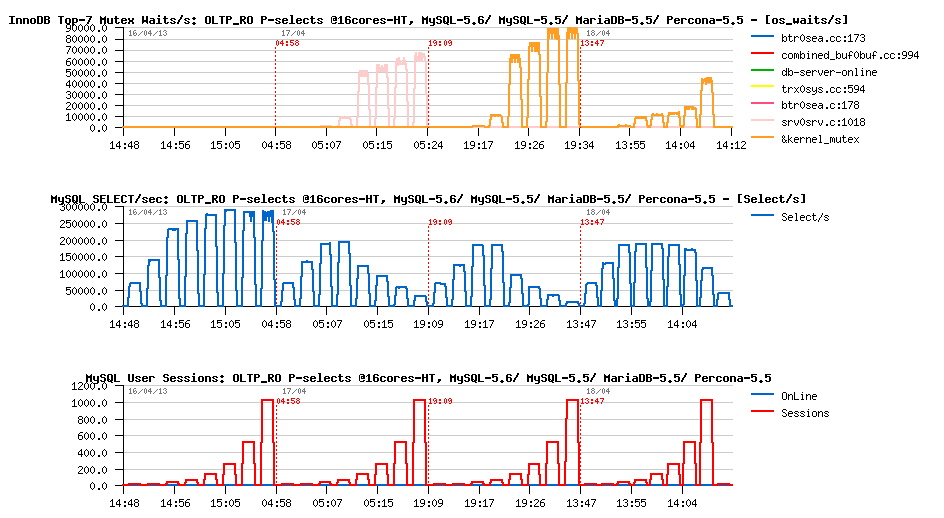 However, more work is needed in 5.6 to get a rid of this trx_sys_mutex contention, because on 32cores it kills performance and we are hitting QPS drop rather increase. And again, have to lower this contention by using a bigger "spin delay" value (96 here) to avoid getting things even worse.. However MySQL 5.6 is still better here than Percona 5.5: 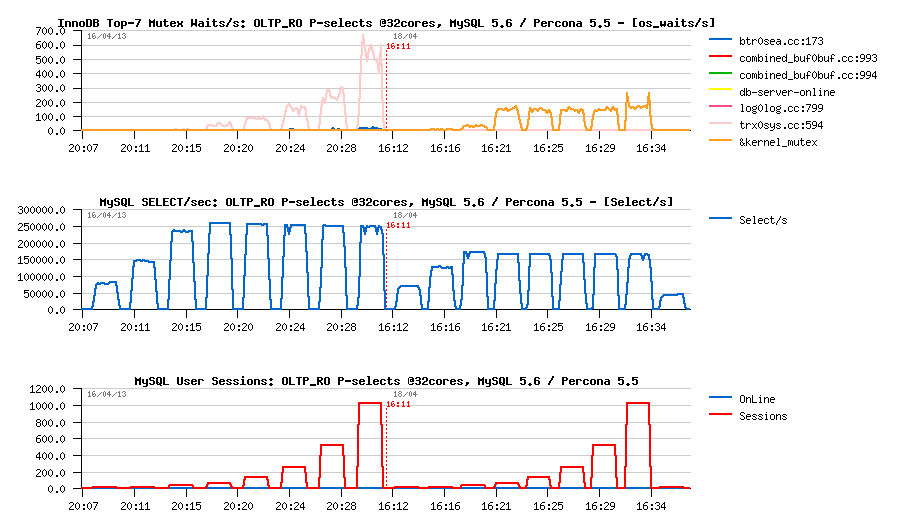 And if we enable HT here the result will be only worse: 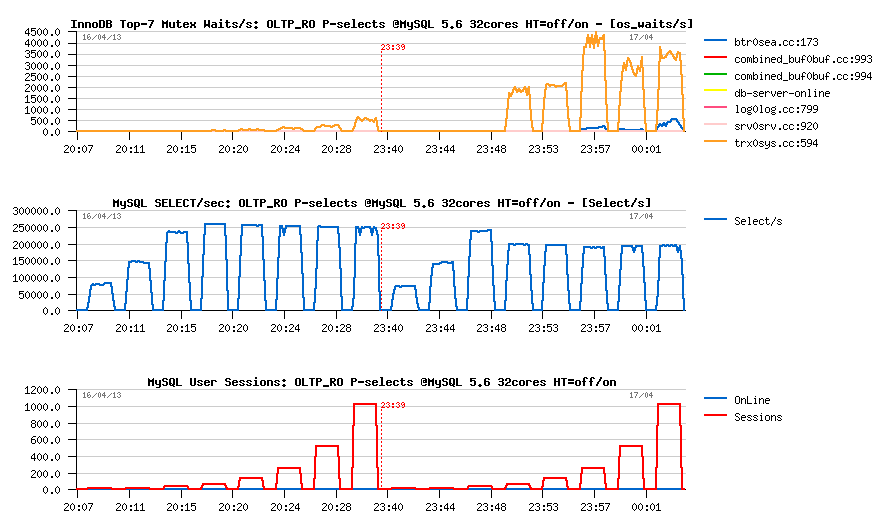 Probably this is a good example of problems related to hot contentions (enabling HT on 16cores improving performance, and using 16cores-HT giving a better result than pure 32cores -- as this contention is so hot, it's as expected then..)

While, of course, as soon as you're having slightly more heavy queries within your workload, this contention will have much less impact, and you'll get higher QPS on 32cores rather on 16cores and matching your HW capacity.. But we have a good challenge here, so work continues, stay tuned ;-)

All this said, there was a very good progress we made already in MySQL 5.6, but there are still tons of challenges in MySQL to improve performance and yet more to do ;-) (and many similar things coming in mind while on road to Percona Live MySQL Conference and flying from Paris to San Francisco.. - looking forward to discuss about any MySQL Performance problems there, so see you soon, it's already within 2 days! ;-))

Of course the "low level" performance is important and remains significant. And "small servers" performance too. In many cases people supposing they have a heavy load because there are observing hundreds or thousands "active" connections, while in reality only few of them are truly active on the same time, and concurrency level is much lower than initially supposed.. Such workloads may remain near free from any internal or external contention, and have performance level depending only on the pure code path overhead..

I'll start first with Read-Only tests (Sysbench OLTP_RO, which is used so often), as this test case is the most simple and really only few factors coming into the game.


What is important here... - single user (or single thread) workload is completely free of any possible or potential contention, so if there is any difference in execution time, then it represents a pure overhead (coming from "somewhere").. Now, if we're comparing MySQL 5.6 with 5.5 (and yet with 5.1) we have to keep in mind that there was no fundamental changes made between them to improve the code path itself. MySQL was lacking "must have" features that people needing in production, so every new release came with a bigger code (means more and more longer code path).. - so just from a "common sense" single user performance cannot be better on MySQL 5.6 than on 5.5 (and not on 5.1 which is even not having MDL code)..

And then we may always speculate on Performance Schema (PFS) impact, Optimizer Traces, not optimal MDL, etc. etc. - forgetting that exactly all these "goodies" will completely change and speed-up your developments and workload analyzes ;-) So, yes, you may still compile MySQL 5.6 without all this stuff and win some 5% or maybe even 10% in performance.. - but it'll be likely you decided to remove from your own car all counters, electronics and air conditioning just to save in autonomy by lowering electricity consumption.. - but will you then still consider it as a "safe driving"? ;-)) (but well, we're not stopping to work on it, and things are constantly improved, stay tuned ;-))

BTW, also while analyzing various MySQL 5.6 "overheads" I've also discovered that on some queries/workloads I'm getting up to 12%(!) performance improvement with MySQL binaries are compiled without "-fno-omit-frame-pointer" GCC option.. - but will you ever consider to use such a MySQL server binaries in production? - because from such a binary you'll never able to get a complete stack trace, means if you'll have any core dumps they all will be just useless, and could be sent directly to /dev/null.. ;-)

But well, this is still yet a half of the problem.. - the main problem for me is that single user OLTP_RO is giving me completely different results from run to run (same test, same config, same HW - but different results from run to run).. Thing are going so fast on OLTP_RO workload once all the data are cached by InnoDB Buffer Pool, then performance result becomes depending on many small things (CPU cache, RAM latency, etc.).. So, when on the same run without any changes you may already get 3% difference, it becomes even harder to understand if some applied new changes will bring you real improvement or additional overhead..

However, we may expect a better stability when we're observing more concurrent sessions running, right? - so, on the following example I've started with 8 concurrent users.


Let's get a look on the following test results:
Le't see now what we're getting in reality:
Observations :
So, seems like to understand something here the only solution is to repeat the same tests as much an possible, and then get an AVG value from obtained variations, which will look then like following:
which is giving us 5.8% performance regression comparing 5.5 to 5.6 on 8 user sessions.. - pretty strange how it was possible that such a difference escaped from our QA tests, because our "red line" there is around 3% (and every test is executed 3 times) - probably we were just little bit more lucky here, etc. - don't know..

But result is a result, and we cannot ignore it, right? ;-)) However, the most interesting for me here is to know exactly from where the difference is coming (and fix it then if it's possible) -- but there is another fun stuff coming ;-)

So, I'm profiling now the same 5.6 and 5.5 workloads with "perf" and getting:
both results are slightly worse than expected (yes, "perf" tool also has its overhead, not only MySQL stuff ;-)), however the result is the result, and there is really 10% difference happened during these tests under profiling, so we should see something pretty visible and big in profiler reports, right? (well, at least expect to see finally something and then at least to know what to fix)..

From a long time I've developed a tool helping me to compare several "perf" reports and highlight the difference. As well we have to keep in mind this "regression level" and do a kind of "normalization" between 5.5 and 5.6 reports -- CPU% time should be slightly increased for the slowest engine (5.6) to be comparable with another one (5.5), so I've used here a multiplier of x1.10 and the result is the following with top-50 most "hot" functions:

Here is the result:
Observations :

Looks like the best "potential" candidate is still my_hash_sort_simple() function, because improved time on this one will at least be very visible as it represents 10% of the whole execution time..

A similar story is coming with 32 users on this server too, except that it has a smaller variation:
So,
And in average QPS we're getting finally 0.4% regression only :
However, if we'll add now on it 2% in binary is compiled with PFS instrumentation, then another 1-2% if you enable only PFS (keeping instrumentation inactive, but able to be activated dynamically) -- then you're getting 4%-5% difference comparing to MySQL 5.5 which is having PFS disabled by default and bigger PFS overhead when enabled (that's why it's disabled by default in 5.5 ;-))

But then, would you refuse this gold mine of information which is proposing you PFS today in exchange of 5% in QPS?.. - Seems to me I have to present you some more detailed stuff here about every potential overhead in PFS to break last doubts if any ;-)) -- and don't forget that more you test PFS and report your problems - better it will be!

Let's get a look now on the OLTP_RW (Read-Write).


Things are going slightly different on OLTP_RW:
While again, even on this "small server" I'm still observing a slightly lower TPS (Commit/sec) here on 5.6 vs 5.5, then looking not just on the TPS numbers, but on details about OLTP_RW on both engines we can see the following: 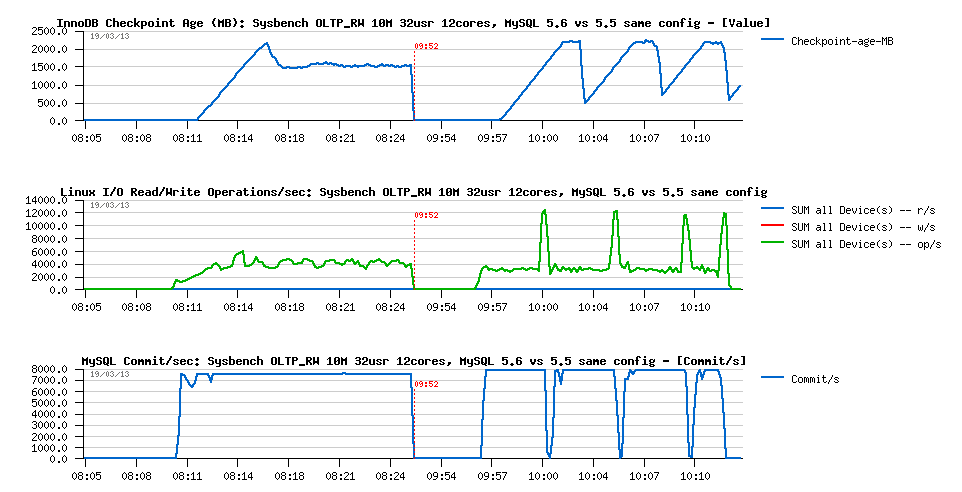 Observations :
While, of course, on a bigger server this workload will run way better on MySQL 5.6 (as you can see from the previous posts).

NOTE: for the following tests MySQL binaries were compiled with PFS instrumentation, but PFS was turned off during the tests.

As well, I have yet more benchmark results that I'm planning to present and discuss during Percona MySQL Conference - so come to join us during 5.6 BoF, our talks, or just around a beer ;-) BTW, if you're still hesitating if you should attend this Conference.. - just trust me, you should! ;-)