This article is continuing the MySQL 5.7 Performance story, started from 1.6M QPS on MySQL 5.7 details post , then 1M QPS on mixed OLTP_RO with MySQL 5.7 article, and detailed story about why the Point-Selects performance is so critical (and why the 1M result published by MariaDB is not fair)..

The current story will be about Connect/sec (connect/disconnect) performance improvement in MySQL 5.7 - such kind of metric is very critical for any application which cannot use persistent connections all the time (and many web apps are in such a case). Well, I'd say MySQL from the beginning was extremely good for its lightweight connections, and made in the past the base of success for many web solutions.. However, time is going, and we're no more with 4cores as "commodity hardware" (this is rather a smart-watch today ;-)) - so, there was a need to speed-up this Connect rate to match higher workloads. This was already greatly done in MySQL 5.6, and finally yet more improved in MySQL 5.7 - you may read all details about directly from our developers - I'll just present here a short summary about where we're today..

So far, first of all, how to test the Connect/sec performance of your MySQL server instance? - the most simple way here is just to use a standard Sysbench kit, load 10M rows into sysbench database (1 table or several tables, no matter -- the main show-stopper here is the Connect code itself), and then run the following :


means on every point-select query your client session will re-connect, and the final QPS result will give you the max Connect/sec rate your MySQL instance is able to reach for a given amount of concurrent users.

And here are the results obtained from older to newer generations Intel-based Linux servers :

MySQL Performance: What is odd with 1M QPS claimed by MariaDB 10.1 ?..

This article is continuing the MySQL 5.7 Performance story, started from 1.6M QPS details post, and followed by 1M QPS OLTP_RO article. However, the current story will not be mostly about MySQL 5.7, but also about announced on the same time MariaDB 10.1 GA ;-)

So far, MySQL Team was proud to show 1.6M QPS on Point-Select (SQL) queries, and MariaDB 10.1 GA announce was also claiming an ability to reach 1M QPS, also on Point-Selects, but on POWER8 HW. And I may be only happy for MariaDB team for their progress on POWER systems, except just one small detail related to how their 1M QPS result was obtained..

But first of all, what are these Point-Selects and what is so special with this workload ?..

So, our 1.6M QPS on Point-Selects with MySQL 5.7 we were able to reach under the most heavy conditions :

and the Sysbench execution command line is looking then as the following:

Adapting these test conditions to my Sysbench command line this will then give the following :


How does this change the initial workload test case ?

Let me show now all this by example, using the test scenario as proposed by MariaDB and just vary the amount of point-selects executed within a single transaction. Let's start with 50 point-selects (which is already too much as to me, but well) :

Then the following are the results with 25, 10, and 5 point-selects executed within the same transaction :

On the last test, with 5 point-selects within a transaction the lower QPS is also impacted by round-trips of BEGIN and COMMIT statements around transaction.. What the result will be if I'll not use transactions? 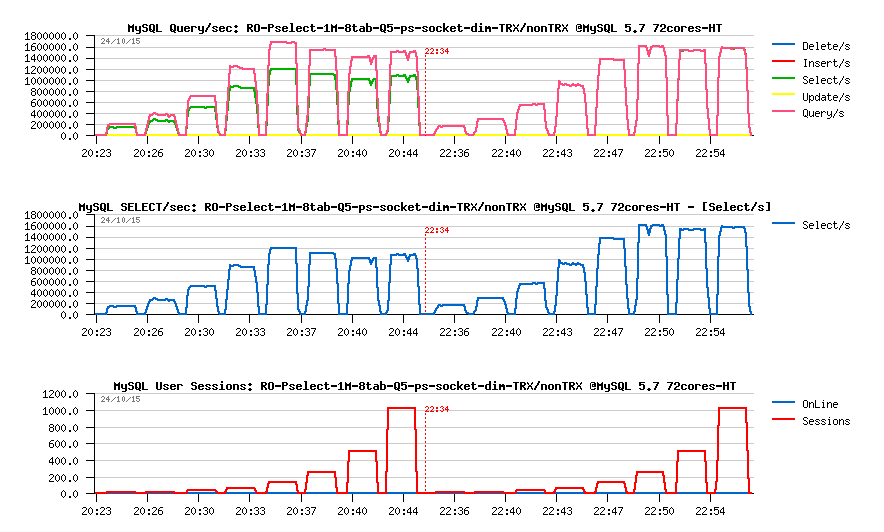 Then, to avoid any kind of speculations about new Intel chips as the reason of excellent MySQL 5.7 scalability results, let me just remind you about the results obtained on the old severs (32cores-HT and 40cores-HT), running the old Intel CPUs (similar 4CPU sockets each, but just 8cores-HT and 10cores-HT per CPU socket, both are running at 2300Mhz frequency). The following are the results obtained on the same Sysbench RO Point-Select workload :

Slides from my talk about MySQL Performance @OpenWorld 2015

Slides from my talk during MySQL Central @OpenWorld 2015 are available from here now :
- http://dimitrik.free.fr/Presentations/MySQL_Perf-Tuning-OOW2015-dim.pdf

they should be soon available from the OpenWorld site as well.

Let's focus now on the Sysbench "mixed" OLTP_RO workload (so, not only Point-Selects, but all RO queries as it was initially designed in OLTP_RO scenario in Sysbench), which is composed of :

Observations :
What about scalability now?

Observations :
Now the same workload, but using only a single 10M rows table.

Observations :
And, similar to the previous article, here are the results reflecting the evolution of tested HW and CPU power :

Indeed, the difference is very impressive ;-)

Over last 2 weeks in all discussions I've got many times the same question : do we really need to upgrade our HW to get the best from MySQL Performance ?...

Let me show you then just few following graphs :

here is HW evolution related to MySQL 5.5 on OLTP_RO the presented workload :

Observations :
And, of course, once you'll move to MySQL 5.7, you'll be able to go yet more far on these new 2CPU or 4CPU sockets :

Observations :
And to finish, few more details about the test conditions :

my.conf -- used exactly the same config settings as in the previous article.