So far, I've got in my hands a server with a Fusion-io card and I'm expecting now to analyze more in details the limits we're hitting within MySQL and InnoDB on heavy Read+Write workloads. As the I/O limit from the HW level should be way far due outstanding Fusion-io card performance, contentions within MySQL/InnoDB code should be much more better visible now (at least I'm expecting ;-))

But before to deploy on it any of MySQL test workloads, I want to understand the I/O limits I'm hitting on the lower levels (if any) - first on the card itself, and then on the filesystem levels..

NOTE : in fact I'm not interested here in the best possible "tuning" or "configuring" of the Fusion-io card itself -- I'm mainly interested in the any possible regression on the I/O performance due adding other operational levels, and in the current article my main concern is about a filesystem. The only thing I'm sure in the current step is to not use CFQ I/O scheduler (see previous results), but rather NOOP or DEADLINE instead ("deadline" was used within all the following tests).

As in the previous I/O testing, all the following test were made with IObench_v5 tool. The server I'm using has 24cores (Intel Xeon E7530 @1.87GHz), 64GB RAM, running Oracle Linux 6.2. From the filesystems In the current testing I'll compare only two: EXT4 and XFS. EXT4 is claiming to have a lot of performance improvements made over the past time, while XFS was the most popular until now in the MySQL world (while in the recent tests made by Percona I was surprised to see EXT4 too, and some other users are claiming to observe a better performance with other FS too.. - the problem is that I also have a limited time to satisfy my curiosity, that's why there are only two filesystems tested for the moment, but you'll see it was already enough ;-))

Then, regarding my I/O tests:

RAW DeviceBy the very first view, I was pretty impressed by the Fusion-io card I've got in my hands: 0.1ms latency on an I/O operation is really good (other SSD drives that I have on the same server are showing 0.3 ms for ex.). However thing may be changes when the I/O load become more heavy..

Let's get a look on the Random-Read:

So, what will change now once a filesystem level is added to the storage??..

While for Random-Read access it doesn't make sense to test "fsync() case" (the data will be fully or partially cached by the filesystem), but for Random-Write and Random-RW it'll be pretty important. So, that's why there are 4 cases represented on each graph containing Write test:

Observations :
Looks like internal serialization is still taking place within EXT4. And the profiling output to compare why there is no performance increase on going from 4 I/O processes to 16 is giving the following:
Looks like there is no difference between two cases, and EXT4 is just going on its own speed.

However, the Wrnd results on XFS is a completely different story:

Observations :
From the profiler output looking on the difference between 4 and 16 I/O processes we may see that XFS is hitting a huge lock contention where the code is spinning around the lock and the __ticket_spin_lock() function become the top hot on CPU time:
I did not find any info if there is any way to tune or to limit spin locks around XFS (while it can be on some kernel level as well, and not be related to XFS..)

And situations with RWrnd is not too much different:

So, looking on all these EXT4 and XFS test results -- it's clear that if in MySQL/InnoDB you have OLTP RW workload which mostly hot on a one particular table (means a single data file if table has no partitions), then regardless all internal contentions you'll already need to resolve within MySQL/InnoDB code, there will be yet a huge limitation coming on the I/O level from the filesystem layer!..


TEST with 8 data files
Let's see now if instead of one single 128GB data file, the load will be distributed between 8 files, 16GB in size each. Don't think any comments are needing for the following test results.

IMPACT of data file numbersWith 8 data files we're reaching very closely the RAW device performance on write I/O operations, and O_DIRECT option seems to be the must for both EXT4 and XFS filesystems. Let's see now if performance is already better with 2 or 4 data files.

INSTEAD OF SUMMARYSeems to reach the max I/O performance from your MySQL/InnoDB database on a flash storage you have to check for the following:

NOTE: this article I've started to write yet before summer vacations, but timing was against me, and I'm able to finish and publish it only now. While my investigations are continuing, you'll find here the explanations why Vadim observed unexpected performance improvements when using a single InnoDB BP instance rather 8, and some other things as well..

The InnoDB Buffer Pool (BP) Instances feature was introduced since MySQL 5.5.4 and presented for the first time during MySQL UC2010. This solution was the key point on its time, as without BP instances no one from other newly added great features was able to show any positive impact on performance (as otherwise all the stuff was still remaining blocked on the BP mutex contention (you may find more details about here and here ))..

Well, you may quickly remark that Adaptive Flushing in MySQL 5.5.4 was not yet really working ;-)
However, there are 4 tests on the graph executed sequentially, but each one with a different number of BP instances:
And as you can see the difference in TPS between the test #1 and #4 is not far from 50% ;-)

The improvement was huge, and since then within all my next benchmarks I've used 8 or 16 BP instances always "by default" without even looking on impact -- performance may be only better, no? ;-)

However, having several BP instances will not always guarantee that you'll avoid BP mutex contention.. - while the distribution of your data within InnoDB pages may be completely random, your workload activity may still hit manly only a subset of pages which is grouped (by no chance) within the same BP instance!.. And in this case for your workload it'll be likely you have only one instance within your Buffer Pool, which brings the fixed problem once again on the table.. (more details on how to discover if you're hitting this issue is here ).

But since MySQL 5.6 things become much more interesting!.. In MySQL 5.6 we have now not only BP instances (as in 5.5), but also improved page_hash locks which are reducing BP contentions even when some pages become more hot then others, and even if they belong to the same BP instance! And I was able to confirm it during many tests over a time, and on small servers there was even near no difference if you're using one or several BP instances..

So, nothing surprising here that for MySQL 5.6 we're willing to have the innodb_buffer_pool_instances=8 by default, right?.. ;-)

BUT!.. - for my huge surprise, MySQL QA Team reported a performance regression on their DBT2 tests once they are using innodb_buffer_pool_instances=8 instead of innodb_buffer_pool_instances=1.. - and the first thing coming in mind "it's impossible!".. - but by a long benchmarking experience I know that everything is possible ;-)) and the first step to do in such a situation is to be able to reproduce the same or similar issue on a different server (it'll avoid you to check in depth HW and OS setup/impact, etc. etc. - then very quickly you'll be able to focus only on what is really important)..

So far, I was "lucky" here! - as I was able to reproduce the same issue on my, similar to QA server, 12cores (Intel) box, and was facing to the following:

Well, Adaptive Flushing is enabled in both cases for sure, but let's get a look on the flushing activity and Checkpoint Age during this test:

Observations :
So, what is wrong here?..

My initial feeling was that there are some differences in the way how flushing is operating when several BP instances are used comparing to a single BP instance.. This feeling finally was correct ;-)) but we spent hours and hours discussing with Inaam (who is our page flushing guru in InnoDB Team) and analyzing the flushing code to find how ever it's possible?.. The only "working" explanation we've found is the following:
Usually to prove such a thing some code tracing should be involved.. But since MySQL 5.6 many things particular to InnoDB are already instrumented within InnoDB METRICS table -- one of these is "flush sync waits" telling if there were some waits on sync flushing by user threads.

As you can see:
So far, at least we found the real explanation to the observed issue! :-)

But now, what about the fix?..

As you can see, there is no QPS drops anymore, regardless if we used 8 BP instances or a single one. Performance is also better, and the next graphs are explaining why:

However, it's still unclear if there is any benefit from using more than one InnoDB Buffer Pool instance in MySQL 5.6.. - seems to me like 12cores server is enough "optimal" (means: small) to observe any BP contentions.. What about 32cores host and with a more powerful storage?..

And what about flushing?.. Let's see: 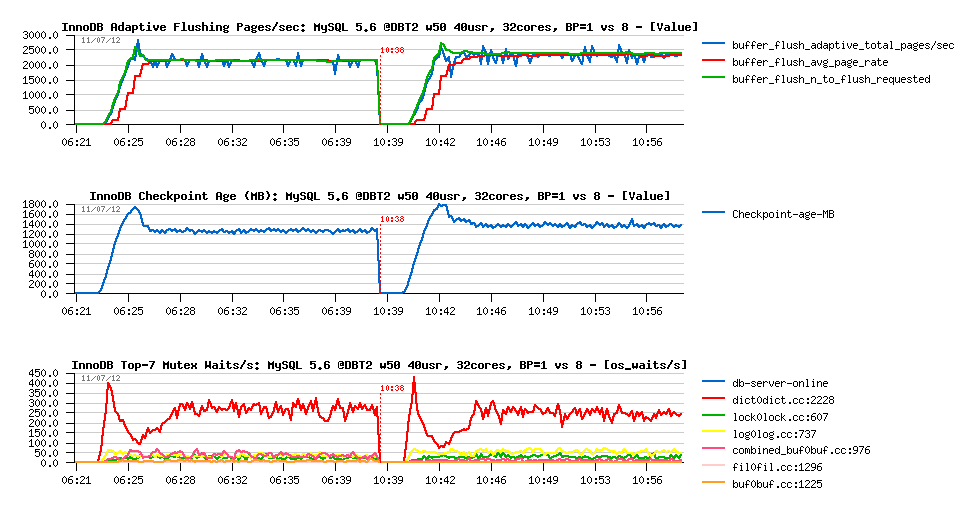 Observations :
And then summary vacations arrived...


After vacations I've tried to replay the tests and get a more in depth look to the problem:
Seems like the "stop the world" state is inevitable for any user threads trying to write while sync flush is involved (which is partially understandable as there is no free space anymore in the REDO logs, and user threads are simply must wait).. - but it'll be great to improve something here, and get this wait more smooth if possible.

Until then, my only advice will be: don't hit sync flushing in InnoDB and avoid it as much as possible!! That's all.