It's from a log time now that I wanted to share the following stuff, but running time was always against me.. ;-)

I'd say that during last years there were plenty incredible events around MySQL Performance. And one of them is a story about Read-Only performance in MySQL 5.6 -- it's quite fun to tell it now, but, believe me, it's even more fun to live it yourself ;-)) Every important milestone around performance improvement in MySQL was similar to resolve a Detective Story ;-) Probably one day somebody will take a time to write a book about ;-)) But for my part, I'm just sharing what I've found interesting and important..

First of all: why even care about Read-Only performance in MySQL/InnoDB ?.. - Well, except if your database is "write-only", but usually data reads are representing a significant part in OLTP activity. And if your database engine is transactional, the reads from such a database are not "simple reads" -- they will also be a part of transactions, hitting different level constrains to match committed-only data or accept "dirty reads", etc. etc. etc. -- just to say that it's not as simple as it looks like ;-)) And on the same time read-only or read-dominated performance represents very significantly an overall database engine design, as it'll fire the most critical internal bottlenecks and give us an idea about its true scalability limits..

NOTE: I'm not covering here IO-bound workloads.. - it'll be already quite a long article, so I'm trying to make it shorter ;-)
(then, as you know, since you become IO-bound, your database performance is driven by your storage performance since then.. - and any DBA will simply advise you to buy a faster storage or more RAM ;-)) -- so, for the moment I'll worry about such a guy who has enough of RAM and still hitting performance/scalability issues ;-))

So far, it's more than a year ago there was shipped the very first working MySQL 5.6 version. It was in April 2011, MySQL 5.6.2 came with one of fundamental changes -- kernel_mutex contention was finally removed within InnoDB!.. This contention was seen as the main scalability stopper on many kind of workloads (including read-only). And Sunny made an incredible work to split kernel_mutex into several mutexes within InnoDB! The result of this work looked very promising. However, there is always a risk that by resolving one contention, you're also making another one more significant (which was simply hidden for the being time by the first one, which was more important until now).. - And it's exactly what happened in MySQL 5.6.2: instead of kernel_mutex contention we moved now to the TRX mutex contention (trx_sys), and in some particular cases performance became even worse than before.. You may find more details about in my MySQL 5.6 notes articles.

TRX mutex is mainly protecting data related to transactions within InnoDB code. While, when a part of your database activity is read-only, the question is coming in mind: is it possible to simplify little bit all this transactional overhead for a read-only operations?.. - And Sunny again came with a brilliant idea to introduce a new type of transactions within InnoDB - READ-ONLY TRANSACTIONS! - I think that his new feature was little bit missed within all other new improvements, while it was the first true and visible progress in MySQL 5.6 performance improvement! ;-))


For more details, please read the Sunny's article explaining all the related stuff and presenting impressive benchmark results on Sysbench!

However, "better" is not enough.. What we're expecting from MySQL 5.6 is to be "way better" than any previous release ;-))

Then we entered into the most painful period, when you're asking yourself several times per day "do you really see what you see?.." and "do you even believe to what you see?.."

To get it by order:
As you may imagine, I've expected to see performance way higher once both patches were applied... - but instead I've observed the following on a simple Sysbench OLTP_RO test: 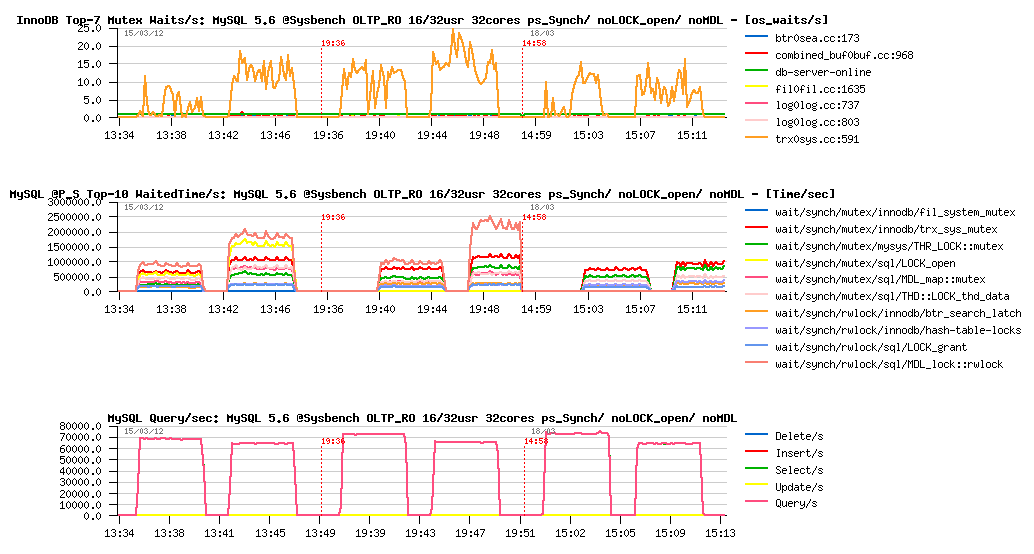 Observations :
I'd admit that during this time I've even traced PFS code to see if what it's reporting is really matching the reality ;-))

All these and other problems we placed into agenda of our MySQL Performance meeting, which this year took place in Paris.. And this meeting was a full success. After one week of brainstorming and common efforts, we finally found the root problem of all observed bottlenecks.. ;-))

This is one of the cases when a database development is meeting HPC level problems ;-)) I've already dedicated a full article for the story of this remarkable improvement, will just note here that bottleneck was related to CPU cache line misses, and once fixed - performance was improved at least by 50% even on the less sensible HW, while on some workloads we even reached x6 times(!) better performance ;-))

The codename "G5" was assigned to this performance patch to reference the list of all improvement applied to MySQL 5.6 related to CPU caches. And since this critical point, our life finally moved to a normal way -- we moved back to true contentions as reported by InnoDB and Performance Schema ;-))

Of course, the most important improvement now was expected from the LOCK_open and MDL patch. However, once again, for our big surprises, removing any use of LOCK_open & MDL stuff did not bring any changes... Why?.. - a more detailed analyze with PFS showed that the most bigger amount of time was now again spent within TRX mutex contention! And it became quite clear, that until TRX mutex is not fixed, there will be no any benefit at all from LOCK_open and MDL fixes..

InnoDB spin wait delay setting is coming in the game

I'd say it was little bit frustrating to observe so high TRX contention even after so impressive speed-ups in already achieved performance levels.. But well, Sunny again, by analyzing code around mutex contention came with conclusion that increasing of wait delays during mutex spins will help to lower observed contentions! - Interesting that innodb_spin_wait_delay setting variable existed from a long date within InnoDB, but I never saw it helping to reduce any mutex contention before ;-) But now, since we came back to pure code contentions, this setting started to shine again!

I've spent an amount of time to analyze it, and to demonstrate the impact of this setting in MySQL 5.6 let me present you a short test result: 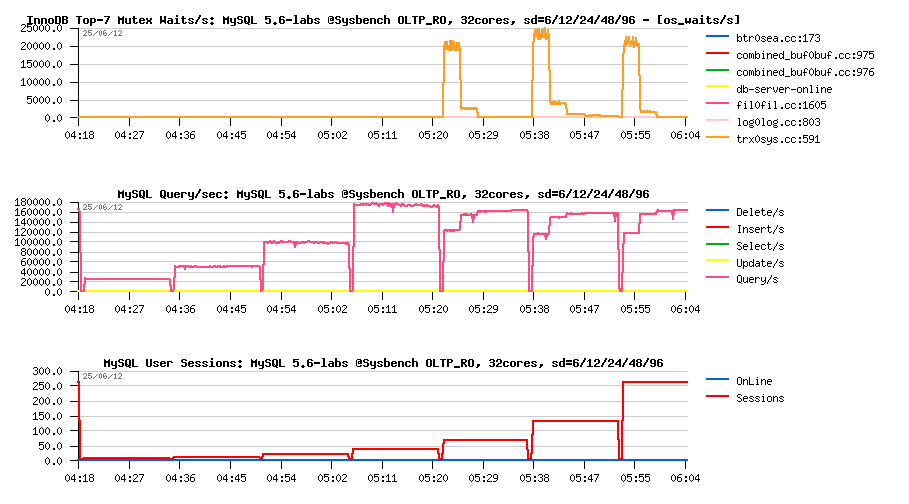 But what exactly the meaning of this setting within InnoDB?..
This reminds me the discussion with Vadim last year about his observations on the innodb_sync_spin_loops impact while hitting kernel_mutex contention. And I also think that these spin related settings should be auto-adaptable and used per mutex rather globally. As well, according my observations, the spin delay setting is having not the same impact on mutexes as on RW-locks. But well, each thing on its time.. ;-))

And only then, after all this improved stuff, we finally were able finally to see the benefit of the latest improvement in MySQL server code and made by Mikael and Dmitry Lenev -- split of LOCK_open mutex contention!.. This gave us yet another 10-15% performance improvement!

And then we're hitting the MDL locks contention.. well, as expected ;-))

So, as you see, MySQL 5.6 is coming with huge improvements in performance! However for the moment the "innodb_spin_wait_delay" is playing a significant role for InnoDB performance tuning.

Let's go little bit further now, and see what happens now to other stuff like AHI, and where we're now with an overall scalability limits..

Keeping in mind we're hitting real contentions since now, the question which is coming back again is: use or not to use Adaptive Hash Index (AHI) ?.. - in many workloads its contention on the btr_search_latch is coming on the top position, however I'm not really sure that waits reported on it by InnoDB are the true waits.. Also, some are claiming to ss a better performance when AHI is turned off. Well, let's see the impact of AHI and its relation with spin wait delay (sd) on the following tests: 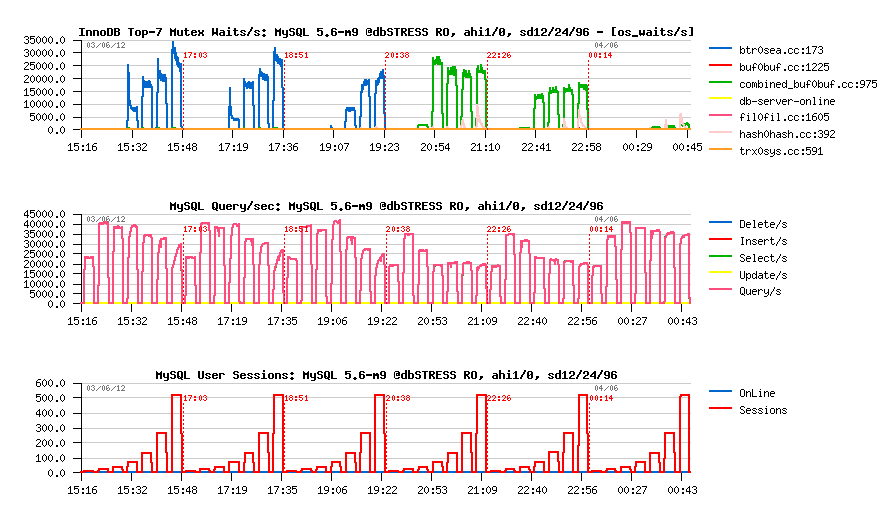 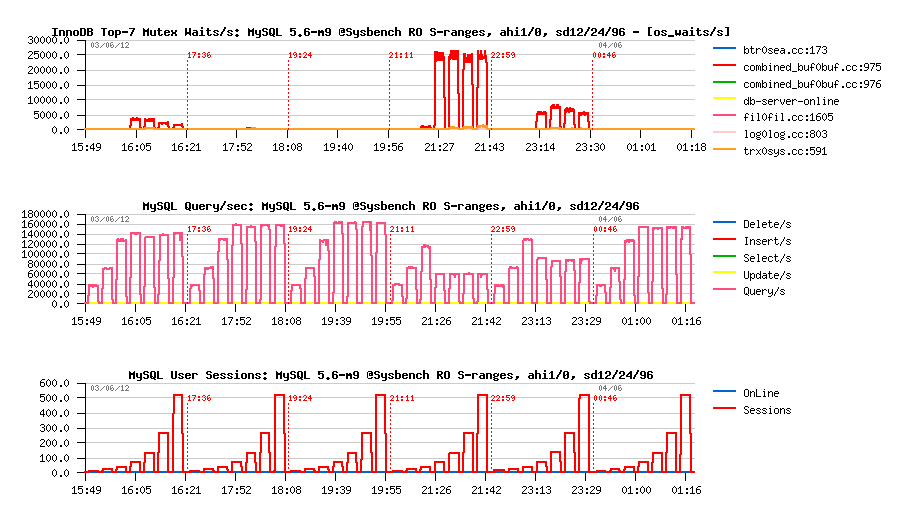 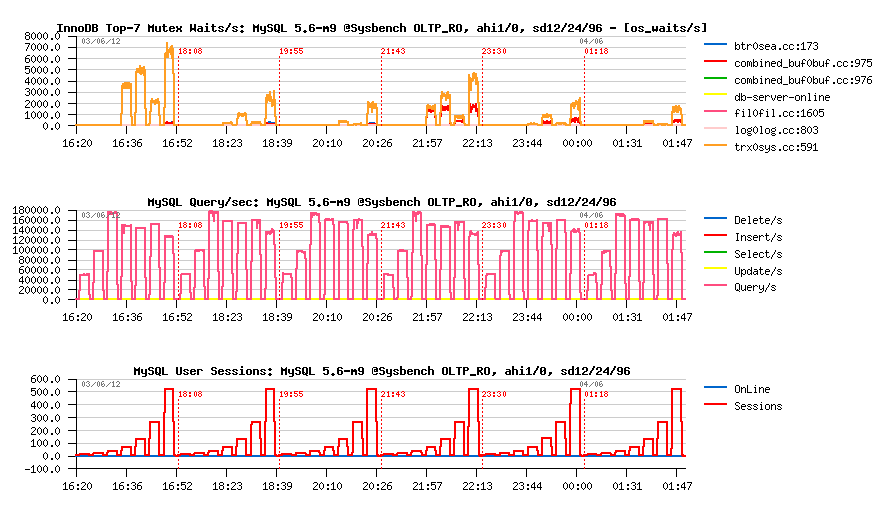 So, from the previous results, seems to me that for the scalability tests I have to use spin wait delay set to 24 when AHI=On, and 96 when AHI=Off. Let's get a look on results with AHI=On first.

Test scenario:
So, to keep it compact, on the following graphs you'll see 8 test series: 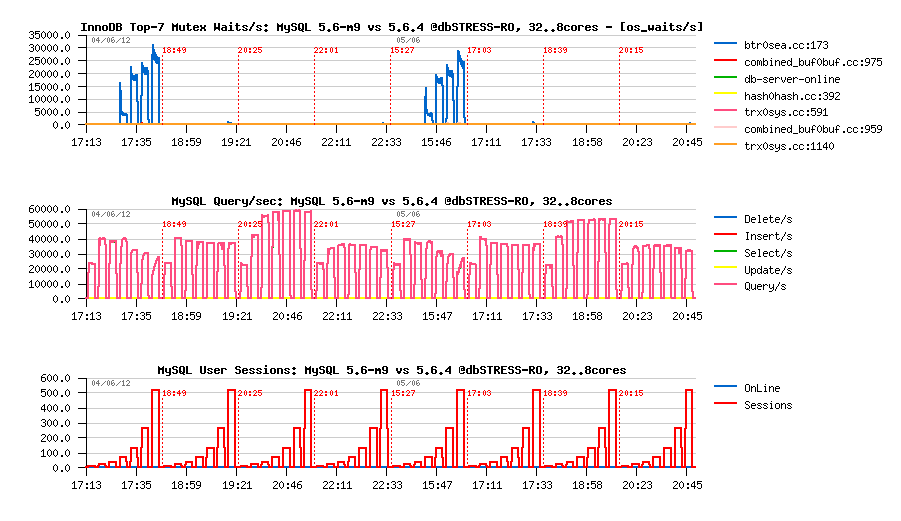 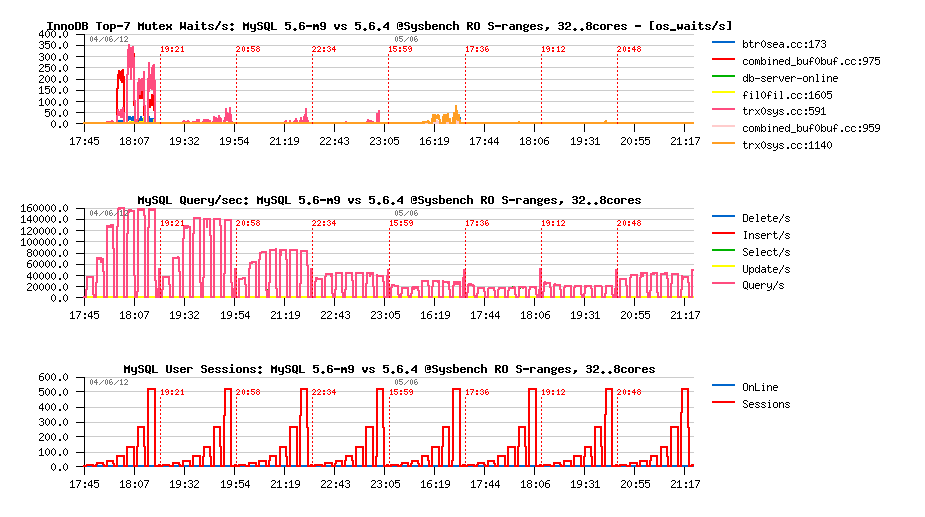 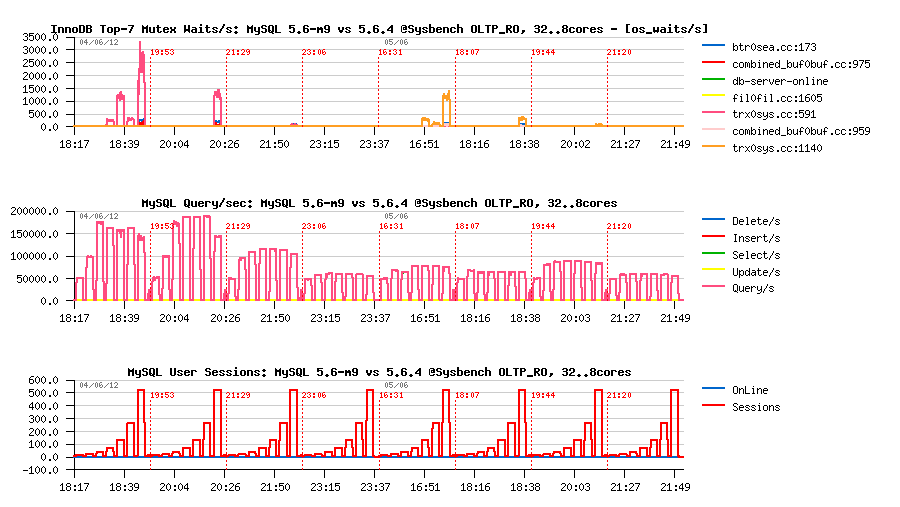 The same tests now, but with AHI=Off and spin delay=96

NOTE: Interesting that results with disabled AHI are quite similar to those with AHI=On, but performance is still better when AHI is turned ON. And, yes, it's clear I'm hitting another "hidden bottleneck" within MySQL 5.6 on dbSTRESS workload.. 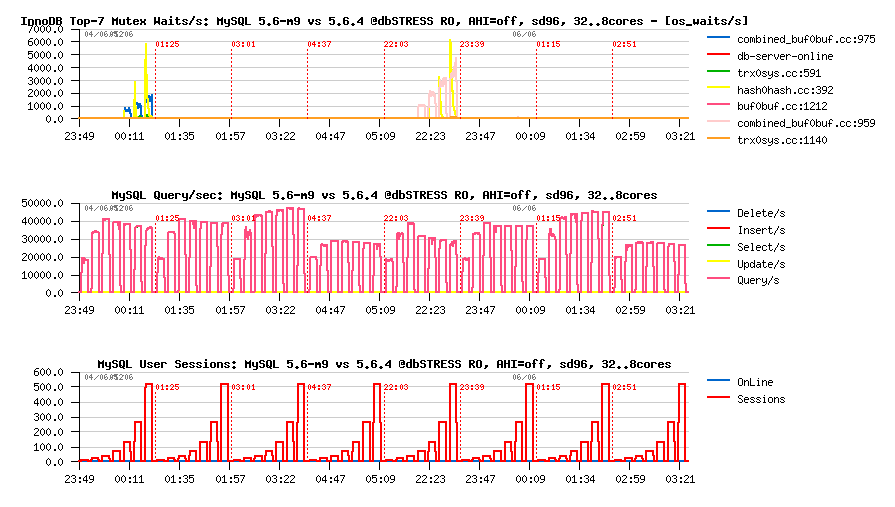 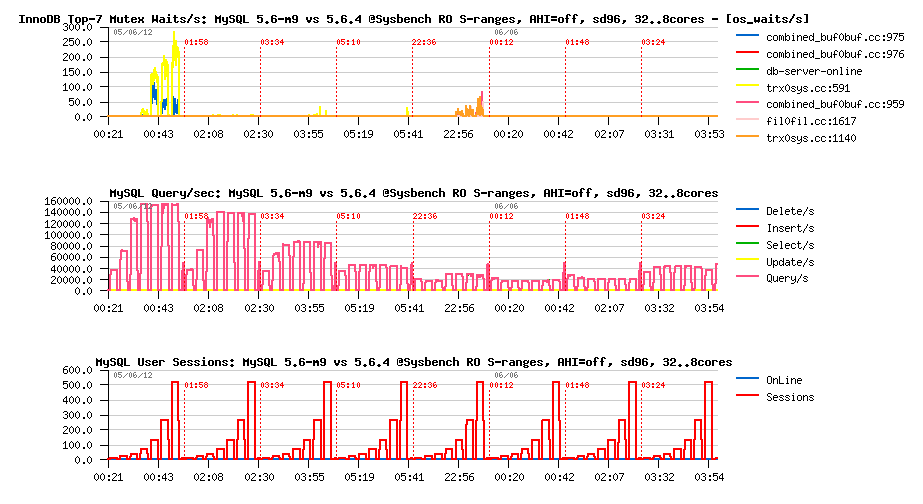 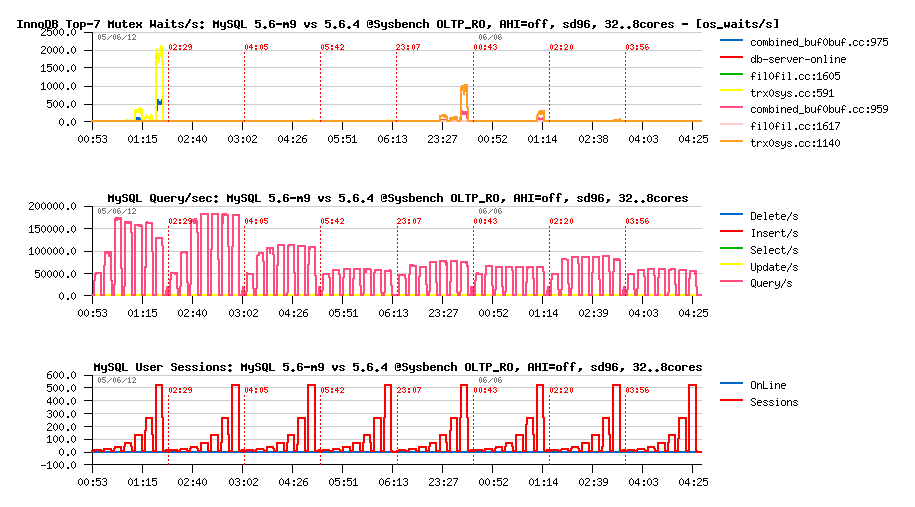 What else to add?..
Just express my personal kudos to Sunny, Mikael and Dmitry! and the whole MySQL Team! ;-))

Then, work is continuing, and new challenges are already waiting for us.. ;-))
As usually, comments are welcome!