This article was initially inspired by Vadim's post on mysqlperformanceblog.com comparing MySQL 5.5.4 and XtraDB under TPCC-like workload. Vadim's post has opened an interesting discussion about InnoDB I/O capacity feature in general, and particularly - tunning / settings regarding 5.5.4 and XtraDB. However, going more in depth I've discovered more interesting things than I've expected initially :-) and here is a kind of summary of my observations..

The following stuff is mainly covering heavy Read+Write workloads as I/O capacity was added to InnoDB to improve page writes rather reading ;-)

First of all - why I/O capacity in InnoDB?..

Initially InnoDB was designed to flush in background only 100 pages per second. The value of 100 pages was fixed within a code and was not configurable. So, if you have got a storage subsystem able to execute more than 100 writes/sec you were not limited by the storage anymore, but by InnoDB itself..

Google team introduced the "I/O capacity" feature within their performance patches giving a way to adapt InnoDB I/O activity according to a given storage array capabilities, etc. This value of IO capacity entered also in many other maintenance tasks when database needs to decide how many pages should be flushed in background. This feature changed many things and bring some new problems as well :-))

Supposing you've procured a storage array able easily to execute 1000 random writes/sec, so how you can improve your performance now?..

First - does it really matter how many dirty pages you have in your buffer pool?.. ;-)

All changes are reflected in the redo log, so in case of crash you should recover them (but well, if you're crashing too often you probably need to change your HW or OS vendor ;-)) But supposing you've got a solid HW, stable OS, huge RAM, fast storage and don't afraid to drive fast :-) So where is a real danger?..

So far, there are at least 2 most critical situations you may reach "by design" :-)

If you still follow me, you'll see that the main problem is coming from redo logs ;-)

There may also arrive another issue due flushing from LRU, but I think its impact will be much less important (or it may be the next issue to fix? - so I'll ignore it for the moment :-))

But well, let's summarize now and go by example:

Sorry if I'm repeating myself, but a small picture says more - here is a performance level on dbSTRESS with 128MB redo logs:

And here is the same workload but with 1024MB redo logs:

BUT - there are huge periodic drops.. And the origin of these drops is out of space in redo logs.

Can it be fixed and how easily ?..

So by tuning the IO capacity setting according your workload you may adapt I/O activity on your systems: more or less aggressive writes will be involved on your storage subsystem. As well it's also very useful when your goal is to run several MySQL servers in parallel on the same host (for virtualization or other reasons) and you expect to guaranty a reasonable storage sharing between your MySQL instances. By IO capacity setting you may attribute a sort of quotas for each MySQL server on write activity, etc.

Now, once the preface is finished, let's go back to the Vadim's article :-)

Vadim in his post pointed on a quite curious situation observed on Percona's TPCC-like workload:

So it means that Adaptive Flushing estimation obtains a higher number of pages to flush comparing to the initially used IO capacity setting... So if the IO capacity is configured lower than it should be for a given workload then InnoDB will not flush fast enough to keep a room of free space in the redo logs and will meet a "furious flushing" every time..

To understand if your IO capacity settings is good enough you may just monitor your checkpoint age over a time: if it remains low, stable and not increasing to reach the critical level (ex: stays under 80% of your redo space MB) - it's ok. Otherwise you should increase your IO capacity value.

The problem also that you cannot change it live for the moment.. So if you discover you have to adjust it within your production workload - it may be a real problem if you have to restart your MySQL server.. - except if your familiar with GDB hacking and feel ok to change a global variable of the currently running MySQL process :-) But seems everybody is agree that IO capacity should be a dynamic variable, so I hope we'll see it dynamic very soon :-))

Another helpful features will be also nice to have:

Seems it'll be easy to add.

However, my attention here was still mainly focused on the one and the same question I've asked myself after Vadim's article: Why having exactly the same (low) IO capacity settings XtraDB is not meeting the same problems as MySQL 5.5.4 ?...

The real answer as usual is coming from the source code reading ;-) - after scanning and tracing XtraDB code under my workloads I've finally discovered that the default Adaptive Checkpoint setting used currently by XtraDB simply don't use IO capacity setting in its formula - it'll simply write as many pages as it estimated! :-)) So it's normal it does not meet any penalties due lower IO capacity setting :-)) The default mode in XtraDB Adaptive Checkpoint is "estimate", and it's implemented currently to write pages without regarding any IO capacity limits/settings (while previously default "reflex" mode is using IO capacity).. - Well, of course the point about how many writes should be involved by InnoDB and should they be limited or remain free of limits is a subject of long discussions (preferable around a beer :-)) But I afraid there will be as many opinions as people :-)) and the most optimal will be probably leave it as an option on configuration setting:

And the last option (#3) I'll try to use during the following tests :-)

Well, if it became less or more clear with IO capacity impact, there were still several questions regarding MySQL 5.5.4 which did not stop to run in my head and needed to find their answers..

When we firstly implemented the Purge Thread feature yet in MySQL 5.4 it did not really bring any performance degradation, but only stability improvements:

MySQL 5.4 with a Purge Thread:

Then there are so many changes were introduced within InnoDB code that when the Purge Thread was officially available in MySQL 5.5.4 the things were changed: we started to see decreased performance on the Purge Thread is activated:

While I can understand there is a performance drop due bigger processing done by InnoDB once it's doing things right ;-)) but looking on the Checkpoint Age graph I still have impression we're probably flushing too much and observed performance gap may still be reduced...

Then, analyzing my tests with XtraDB I was also surprised that this performance drop in 5.5.4 is significantly higher then in XtraDB: 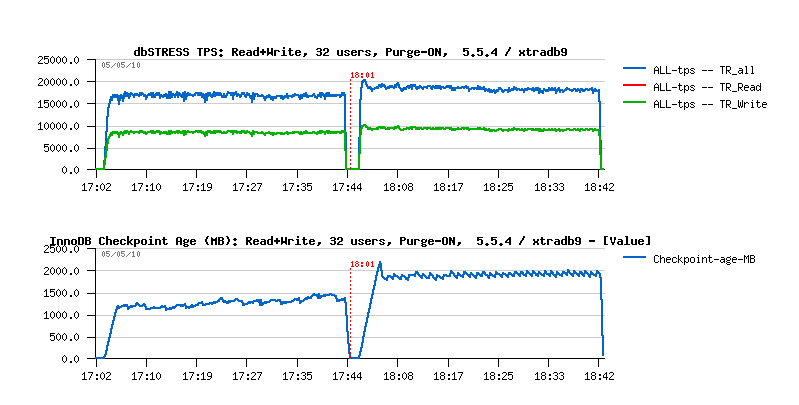 Having 17.000 TPS and 18.000 TPS makes an important difference, specially that having only one purge thread is not yet removing completely a purge lag, and you may need to run two purge threads or have a purge lag fix applied to reach a real stability, but this will also reduce your performance little bit because purging has a big cost! (Ref.: MySQL Performance: Improving Stability for more details)..

And again, looking on Checkpoint Age, there are 2 things coming in mind:

All these observations make me think there is something wrong in the way we're flushing dirty pages.. But on the same time the code logic in InnoDB don't make me think something was missed.. Which bring me on idea that we simply don't focus on the right direction...

Initially I've started to trace estimation values reported by InnoDB Adaptive Flushing - and it's true, sometimes they were looking too high or too low.. So, I've replaced estimation function by my own formula similar that I've used in 5.4 tests - and it was possible to make InnoDB performing better with a such simple formula, but it make me worry on the same time that such a tunning will be very workload oriented rather universal..

And then getting all things presented above together I've started to look in the root of the problem:

Looking on all of these points make me thing that it doesn't really matter how many dirty pages we've estimated to flush.. What is really important - we have just to follow a redo log activity to be sure there is always a free space in redo logs! And all we need is just flush enough to free the tail of the redo logs on the same speed as the redo log is filled :-))

To implement such a solution we have to get a look on how the batch flush function is called within InnoDB:

So what about the TPS results now? ;-)) - I've got even slightly better result comparing to XtraDB, but again - single purge thread is not enough to reach a complete stability, and as mentioned in the previous post , you'll need to have a second purge thread or a purge lag fixed. Solution with a Purge Lag still gives a better result, and by setting innodb_max_purge_lag=400000 we obtaining the following result with XtraDB:

As you see, limiting Purge Lag to 400K is reducing performance (as expected): from ~18.000 TPS we're going to 17.000-17.500 TPS.. However there is a huge changes on the History List length - if before after 40min of activity it grew up to 10M(!!), then now it remains stable at 400K, which is way better for production environment and general workload stability as well..

As before 5.5.4 was worse than XtraDB when the Purge Thread is activated, it was also worse with a Purge Lag limit too.. But now, when the gap is removed, what is the sable result with improved 5.5.4 ?.. ;-))

As you can see, over a time 5.5.4 is now the same or even slightly higher then XtraDB! So the proposed solution seems to work better than current flushing estimation in InnoDB.. - but more testing and also on another workloads will be need to find an optimal way ;-))

I've supposed to finish here, but then entered into another mess...

To get the final results with a growing number of users I've started a classic workload from 1 to 256 users, and observed absolutely strange things having just a one active user:

As you can see, the proposed (patched) solution brings a total disorder on workload stability when there is not 32 but only one user is running in the database...

Looking on the Checkpoint Age graph - it's clear we're flushing too much here.. But WHY?...

Once again, the answers are coming from the source code:

Applying all these changes, I've got the following results:

And curiously it's even better now comparing to XtraDB:

There is still possible that even well tuned IO capacity configuration may meet cases when the IO capacity setting may be lower than needed.. And as I said, it should be configurable and up to user decision if writes should be free of limit or not.. In my case I've tested an auto adaptive IO capacity which is incremented progressively every time the redo log free space become close to critical levels..

Here is a test I've made to see if over the same period of non-stop Read+Write activity 5.5.4+ will still be able to keep the same performance level if I'll disable max purge lag limit (but purge thread active) - if you remember, the result initially for 5.5.4 was 17.000 TPS, and 18.000 TPS for XtraDB within the same conditions - and now for modified 5.5.4+ :

As you can see:

So far, the work continues, and it's time for vacations now :-))